What Kind of Biblio- Are You? 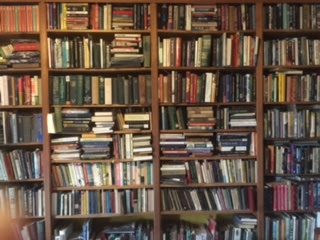 If I have a weakness -- and everybody agrees that's understating it -- it's that I'm overfond of stuffy old compilations of essays. Belles lettres. Books that were written just for the joy of putting words down on paper. Resting on a shelf in the bathroom convenient to the throne right now is Curiosities of Literature, a selection of essays from a much larger collection of the same name by Isaac D'Israeli, father of the similarly-named British politician.

Ben's dad Ike was the sort of scholar who is never happier than when writing about other writers writing about writers and their books. And in an essay on "the rabid Abbé Rive," he provides the divine's useful list of types of book amateurs:


A bibliognoste, from the Greek, is one knowing in title-pages and colophons, and in editions; the place and year when printed; the presses whence issued; and all the minutiæ of a book.

A bibliographe is a describer of books and other literary arrangements.

A bibliomane is an indiscriminate accumulator, who blunders faster than he buys, cock-brained and purse-heavy.

A bibliophile, the lover of books, is the only one in the class who appears to read them for his own pleasure.

A bibliotaphe buries his books, by keeping them under lock, or framing them in glass-cases.

To these categories, D'Israeli adds two more, both professional: The bibliothecaire or librarian and the bibliopole or bookseller, particularly of rare books.

So where do you fall on the spectrum? Me, I'm somewhere between a bibliophile and a bibliomane.

And are there any more useful categories that could be added to the above?

Above: Some of the books in my bedroom. Not, it goes without saying, the largest collection of books in the house.

Sadly, a bibliomane, to the point where it might look, to the untutored eye as if my life were sliding into chaos. In recent weeks I've been trying to purge three or four every week, in order to restore the illusion of control over my life. It's quite affecting to see the books averting their eyes and hiding behind each other as they wonder who will be caught up in this weeks purge. Still - a revolution is not a dinner party.

Curiosities of Literature is a gem though, and not in line for purging.

When I clicked on the blog title I thought it was asking what kind of Bilbo am I...

Not sure what kind of biblio I am, I have been struggling to negotiate mid-adult problems of limited space in my house, limited funds and less free time, compounded by the existence of electronic books as well as so many other forms of entertainment available in my pocket or living room wheneVer I want them...

I am a bibliophile and was a bibliopole for many years as well, although I never specialized in the rare. I myself love to read writers "writing about other writers writing about writers and their books"--hence print subscriptions to The New York Review of Books, The London Review of Books, the (London) Times Literary Supplement...it borders on some kind of disorder.

Happy holidays, and thanks for the fun post! -Dan Joy

I always buy books with the intent of reading them, but I also buy books faster than I have time to read them all. (This may improve if I ever reach the ever-receding state of full retirement, or become one of Nancy Kress' Sleepless.)

These characters are to be shunned, perhaps?