A Second Night of Galactic Philadelphia 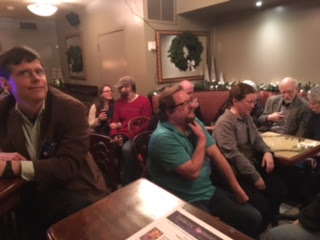 So there's this monthly reading series called Galactic Philadelphia, which is held in the Irish Pub in (no prizes for guessing this one) Center City Philadelphia. Last week, the guest readers were Tom Doyle and Fran Wilde.  That's Tom up above at the far left with the Usual Suspects behind him. And by "usual suspects," I mean pretty much a Who's Who of the local science fiction world. 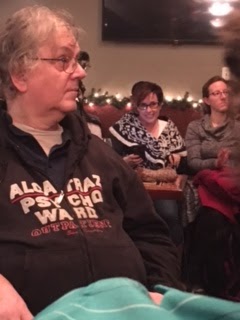 Dominating the photo above is writer/editor/fan/pretty-much-everyting-else Darrell Schweitzer, oblivious to the fact that he's being photographed. Behind him is Fran Wilde, not oblivious to the fact that she's being photographed. (To be fair, I also took a shot where she didn't notice but it was much duller, so I yelled, "Hey, FRAN!" to get a better one.)

Not shown but among those present were nanopress magnate, Marianne Porter, writers Samuel R. Delany and Tom Purdom, and Dennis Rickett. 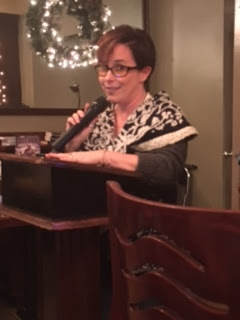 And, finally, here's Fran Wilde herself.

This is only the second event of the series and it had to be moved to a larger room. There's a very comfortable feel to this event. I enjoyed it immensely. So... Kudos to Sally Grotta and Lawrence Schoen, who are the driving forces behind the series. (If I've left anyone out, I'm sure they'll let me know. Nicely, of course. Because they're not mean people.)

Above, top: How many of the people behind Tom can you identify?