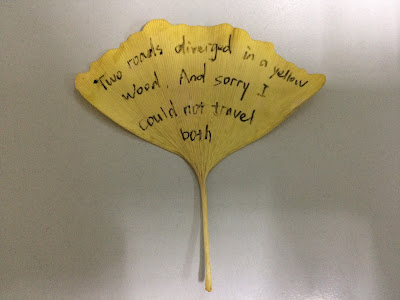 My friend and occasional editor, Gabrielle Wei, knowing of my fondness for writing on leaves, sent me the above picture of a ginkgo leaf. I was touched, of course, but also reminded of a true story.

This happened to a neighbor of my family's, back when we lived in Winooski, Vermont. She was out driving, one day, on a lonely country road, when she came to an intersection. She stopped at the stop sign and started forward.

Just then, a maniac driving far too fast for the road, blasted through the intersection, ignoring the stop sign entirely.

Both drivers slammed on their brakes. They missed colliding by inches. The driver who had been going too fast turned to look back and glared at my neighbor in fury. Then he put his foot on the accelerator and sped away.

And our neighbor recognized him.

She told us the next day that she sat in her car for several minutes, shivering, and reflecting on the headline that would have been printed the next day, had she not braked in time:

Every word of this story is true. Had it been a fiction, I'm pretty sure there would have been an implicit moral to it.


And as long as we're talking about leaves...

Here's a picture I took of the water trough outside the thatched cottage of Du Fu in Chengdu. It looks like I left out a couple of strokes in the great poet's name, but that's just a trick of the light. I copied it out very carefully. 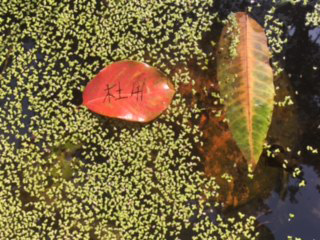 
Posted by Michael Swanwick at 7:35 AM

Particularly appropriate that you wrote those lines on a ginkgo leaf - the evolutionary lineage that gave rise to the non-flowering plants split, one branch giving rise to the ginkgos, the other to the conifers. A ginkgo leaf represents one road of evolutionary potential, one that the world actually did go down (in the time of the dinosaurs), but then retreated from, to follow the path of the pines.