The Man With The Write Stuff 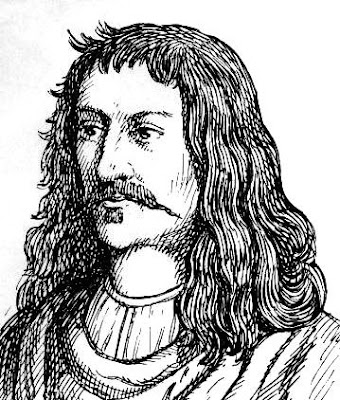 A while back, I wrote a story called "Goblin Lake," which was in part a metafiction based on several chapters of Simplicius Simplicissimus, by Hans Jakob Christoffel Von Grimmelshausen.

Okay, I hear you saying, Hans Jakob What?

Good question. During the Thirty Years War, a troop of Hessian soldiers rolled up to a farm and confiscated food, horses -- and a ten year old boy for a servant. He grew up in the military, became a soldier, and, upon the end of the war,  got a job managing the estate of his former CO.

The quintessential self-made man and a born writer to boot, Von Grimmelshausen (a nom de plume and the anagram of the name of his master's estate; we have no idea what his real name was) wrote a picaresque novel about a simple peasant boy, raised by a monk, who becomes a soldier, a doctor, a courtier, a lover, and pretty much everything else a man of his times could become. It is great fun, occasionally scatological, and, not surprisingly, it became a best seller.

Those who know something about Seventeenth-Century literature can see the next part coming. Somebody pirated the book and added new chapters, thus killing the market for the original book.

Did Von Grimmelshausen get angry? Did he get even? No. The man was, as I said, a born writer. The real thing. He had the Write Stuff.

He added another ten chapters to the end of the pirated edition, kept the material written by whoever had stolen his work, and published the end-result as his own.

He was, and remains, an inspiration for us all.