Night Thoughts in the Thurber House 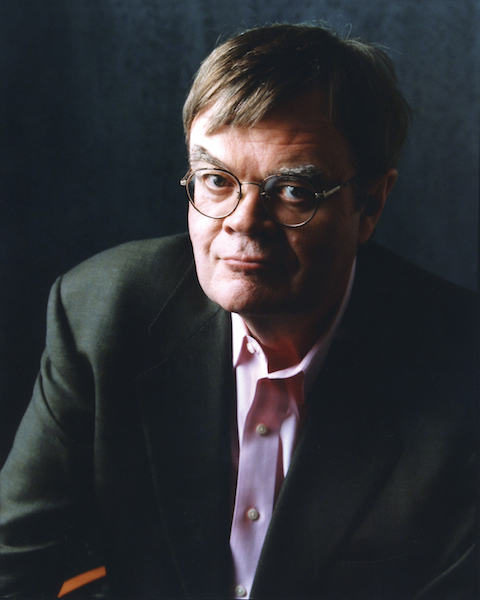 Garrison Keillor has retired from radio. Saturday was his final performance. I'm far from the only person who's going to miss that astonishing voice of his and, in particular, the News from Lake Wobegon.

They're going to try to keep the A Prairie Home Companion going, but I doubt it will work. Most likely, they'll try to turn it into a musical variety show, which is something it never was. It was two-hour festival of storytelling with occasional music. And it was powered by the fact that Keillor was -- is -- one of the greatest short fiction writers of the past fifty years.

That and a hit radio show will make you a decent living.

A couple of years ago, I went to a writing event in the Mark Twain House in Hartford, Connecticut. Picture a library full of introverts tapping away at their laptops or scribbling on pads of paper. I began a lot of stories there and finished six, which I published in the New York Review of Science Fiction. One of them, set in the house of yet another important writer, was written in praise of Keillor. I present it below.

Vaya con dios, sir. You are one of the ornaments of American literature.

Night Thoughts in the Thurber House


James Thurber’s childhood home in Columbus had the rare fortune to be preserved as a museum and literary center.  In consequence of which, twice a year it hosted a writer-in-residence who was housed in a furnished third-floor room and given the gift of time to work on his or her craft.  That room, the very one from which Thurber’s grandfather (as described in My Life and Hard Times) threw shoes down the stairway to frighten away ghosts, subsequently knew many distinguished writers.  But possibly the most honored and certainly the most frequent of these guests was Garrison Keillor.
One night, the first night of his third residency, Keillor was visited by the ghost of Mark Twain.  He’d been lying abed, unable to sleep, thinking of the fate of literary humorists in America.  So many of the greats were completely forgotten!  Thurber himself grew year by year less well known, less beloved, though his prose was still as fresh as the day it was written.  It was a sobering subject for a man who was known and beloved as a humorist himself, and the occasion for many dark thoughts.
A sudden chuckle, close at hand, brought Keillor bolt upright in the bed.  Whipping his head to one side, he saw a ghostly pallor in the form of a whiskered gent in a white suit.  He recognized the apparition immediately – who would not? – as Samuel Clemens, the man who wrote under the pseudonym of Mark Twain.
“You’re working yourself into a sweat, old hoss,” the revenant said genially, “and all to no purpose.”
Keillor, who had in his time read many fictional accounts of such confrontations with the illustrious dead, knew that this sort of visitation traditionally brought comfort and solace to those on the receiving end.  So, feeling encouraged, he said, “You mean because my posthumous reputation is secure?”
Mark Twain laughed.  “I mean no such thing.  No, the intent of my words is exactly the opposite.  You might as well stop worrying because the fame you want is simply not yours to be had.”  He produced a cigar out of nowhere and sucked on it complacently. “The public mind is small, you see, and has just enough room in it for one humorist.  Which position I’ve got pretty solidly nailed down.  Not just by my works, mind you, but also by my personality, which is so damnably if undeservedly loveable as to be unassailable. So you see, you might as well stop worrying about your place in literary history.  It’s already occupied.”
“Surely there’s room for two,” Keillor said pleadingly.
The spirit shook his snow-white locks.  “How did that moving picture show put it?  ‘There can be only one.’  I took out Bret Harte, and I knocked down Jim Thurber, and I reckon I can settle for you as well.”
So saying, the phantom faded away.
After that, there was no possibility of sleep.  Keillor got up, got dressed, and sat down to write.  “You bastard,” he said.  “I’ll get you.”


And he began to compose the most heartwarming story about Mark Twain anybody had ever written.

Copyright 2014 by Michael Swanwick. This story first appeared in the New York Review of Science Fiction.

A gem of a story,Michael.It deserves being reprinted somewhere. But beware.You are approaching the border between being an honored SF and fantasy author and becoming a honored mainstream author.Approach that border at your peril. Cross it and then you will have to give interviews all day, attend fundraising dinners, and play in a band with Stephen King!

Just like the poor coal-miner's father in Monty Python.