In Which I Am Interviewed by Chris Urie 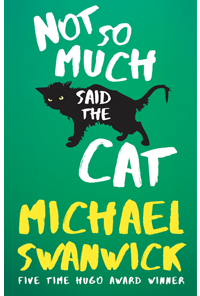 The industrious Chris Urie, writer and Associate Editor at Geekadelphia, has interviewed me for Clarkesworld. The occasion is the imminent (soon! very soon! sometime this month!) of my new Tachyon Publications collection, Not So Much, Said the Cat.

Her's how it begins:

Why does the cat say “not so much?”
He’s a character in a story about a young teenaged girl’s attempt to rescue her father from Hell. Beelzebub is there for whatever reasons a cat would be sent to perdition, and when he delivers that line he’s telling the girl that she might be lovely to look at for other humans, but for a cat . . . Which he does simply because he’s a contrarian and in Hell honesty is an offense to local community standards.
I hadn’t thought of this before, but Beelzebub—“Not the famous one, obviously,” as he says—and I have a lot in common. We both enjoy telling the truth in unexpected ways.

You can find the entire interview here. Or you can simply go to Clarkesworld itself here and poke around, maybe read a few stories. It publishes a lot of good fiction.