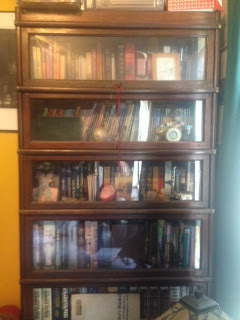 One of the central ironies of a writer's life is that you look the least productive when you're working the hardest. And vice versa. When a new novel comes out, it represents work that was completed perhaps a year earlier. But it sure makes you look good. Conversely, when you're working hardest, there's nothing new coming out and you appear to be stuck somewhere between lazy and indolent.

Right now, on the stands... pretty much nothing. But I'm working very hard on The Iron Dragon's Mother. And I've got a number of lesser but very cool projects in the pipeline, which will be coming out at irregular intervals over the coming year. So I'm busy as can be.

Most of these projects I can't mention, for various reasons. But I will say that The Universe Box Project over at Marianne's Dragonstairs Press moves steadily toward completion, and that when it is done, it will be something rare and wonderful.

Oh, yeah, and my newest short fiction collection, Not So Much, Said the Cat should be on the stands in not terribly long. But that's the other side of the coin. It contains seventeen stories, written over the course of several years. So its appearance will not indicate that I am being industrious -- just that I was so, once upon a time.


Above: The shelves where I keep copies of all my publications. They filled up long ago, and everything since is scattered about in shelves and boxes elsewhere in the house.

Posted by Michael Swanwick at 12:11 PM

Fantastic, Michael. Could you lay claim to having the most extensive Swanwick collection? Of have you been giving away your translated publications of foreign sales?

I've got things no one else has. Somewhere (I could find it if I spent an hour going through the shelves), I have a copy of the directory of solar houses in Pennsylvania that Marianne and I (and several other volunteers) wrote the descriptions for.

Also a complete set of Dragonstairs Press publications. Only one other person in the world has that.

I'm thrilled to know that you are working on The Iron Dragons Mother, so much so that I will now use an exclamation point!
Anywho I was curious, is this going to be an official/unofficial sequel/follow-up to Iron Dragons Daughter? or is it more of a sequel/follow-up to Dragons of Babel?
OR is it a third book in the same 'whenwhere' that will link the first two together and form a very loose...*cough*, trilogy (of sorts)?
Whatever the answer, I am really looking forward to it.


*Apologies for wanton use of punkedyouayshon, I know rite goode...