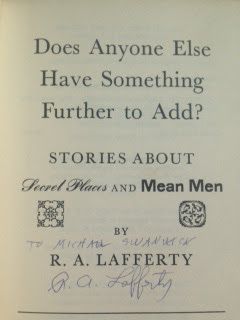 Yesterday, Andrew Mass came to the house to interview me for a documentary film he's making about R. A. Lafferty. It went well, I think. But afterward, it occurred to me that I had one small story about Lafferty that I've never committed to print. So here it is.

Forty years ago, I attended my first Worldcon -- MidAmeriCon in Kansas City. Where my motley crew of friends brought things like electric guitars and amps, the Starship Troopers war game, an industrial laser, and so on, I carried with me a single book, a hardcover of Lafferty's Does Anyone Else Have Anything Further to Add? Of all the writers present (pretty much everyone in the SF world), his was the autograph I most desired.

I must have been ignorant of the fact that there were scheduled autograph sessions because i carried the book around with me, hoping I would see the man. And I did! He was talking to Silverberg or Asimov or some other giant of the field, so I stood nearby and in a break in the conversation asked if he would sign my book.

Lafferty took the book, flipped to the title page, then flipped two pages back and signed the blank end-paer. I thanked the man and floated away.

A couple of my friends were nearby and, laughing, took the book from me and opened it to the title page. There was Lafferty's autograph a second time, inscribed to me. It was a surreal moment.

My friends, it turned out, had earlier taken my book while I was sleeping, gotten the autograph, and then not told me. As a practical joke, you see. But it hadn't quite worked out the way they'd thought it would because, on seeing his signature, Lafferty had simply found another page to sign.

It was a kindly act, not calling me out for asking him to sign a book that was already signed. Lafferty was a true gent.

Maybe he assessed the probable reason in an intuitive flash (you probably had an ingenuous face back then) and was happy to fool the trickster who'd forced you into this position.
I bought a mass of remainders of Does Anyone Else Have Something Further to Add? from the World's Biggest Bookstore back in the late seventies, and gave them away to everyone.

I had a similar experience with Alfred Bester, with perhaps even better results. I had just bought a used copy of Starlight from the dealer's room when he hove into sight. When he opened it to sign, we both saw that it had already been signed. Here's a picture of his immediate response: