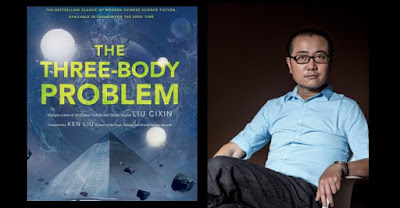 The industrious Carl Slaughter has published an interview with Chinese SF superstar Liu Cixin (or, as his name is rendered in English translation, Cixin Liu) over in File 770. It is emblematic of how difficult it is for Americans to receive news of overseas SF that this interview took two long years, several intermediaries and more than one translator to get here. (The current version is by, one almost says "of course," Ken Liu, whose translations have become the gold standard for Chinese SF.)

Liu Cixin is best known for The Three-Body Problem, volume one of a hard-SF trilogy of the same name, which was the first science fiction novel to become a mainstream best-seller in China, and the first translated work to the the Hugo Award. More significant, I feel, is the fact that his fellow science fiction writers in China are in awe of his work. I'm a big fan of this guy.

Here's an excerpt from the interview:


You can read the entire interview here.