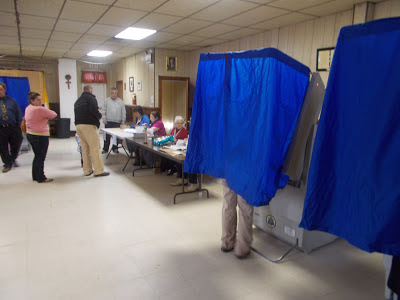 This is what democracy looks like.  Marianne and I got up this morning, walked over to the Knights of Columbus hall, voted, and then went over to Crossroads Coffee House for breakfast.  It wasn't very dramatic.

But that's the whole point, innit?  More times than not, I've seen my favored candidate go down in flames and somebody I despised (Richard Nixon and George W. Bush come to mind) elected president.  But I've never, even when I was young and hotheaded, been tempted to pick up a gun afterward.

Brilliant invention, the vote is.  We had a good turnout too.  I was number 62 and the polls had only been open some forty minutes.