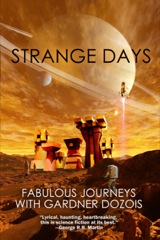 Ordinarily, I only push my own books here.  But I'm going to make an exception this once, because Baen Books is selling a bundle of seven e-books -- five brilliant story collections, one brilliant novel, and one potboiler -- by Gardner Dozois.  This is very close to everything he's ever written, and at twenty-five dollars, it's a bargain.

Should you buy it?  Well, if you've already some of Gardner's work, you know the answer.  But if you haven't . . . if you're one of those far too many people who are aware that Gardner is a brilliant, award-winning editor but haven't read any of his fiction . . . then yes, absolutely.

Here's what I wrote in the introduction to Strange Days:

Imagine you’re at a party in Gardner’s apartment. It’s not large, but he’s invited swarms of people, so it’s very crowded. Gardner keeps his awards on a little table not far from the door. People who have never been there before, young editors and the like, will eventually drift over to admire the thicket of Hugos for his work as an editor, and while there notice two Nebulas gleaming in their midst. Inevitably, someone will say, “I didn’t know Gardner was a writer.”

“Oh, yes,” one of us Old Hands will reply (we linger near the trophy table for this very purpose), “Gardner’s a much better writer than he is an editor!”


Which was true then, and is true now.  In addition to Strange Days, the bundle includes the collections A Day in the Life, Another World, The Visible Man, Morning Child and Other Stories, the stunning novel Strangers, and Nightmare Blue (the potboiler).  Even Homer wrote the occasional novel about a policeman tracking down a shape-shifting alien drug dealer.

You can find the bundle of two novels and five short story collections here. 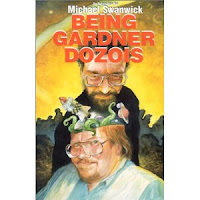 Hero small-press publisher Michael Walsh would be very annoyed at me if I didn't mention that he still has copies of Being Gardner Dozois for sale.  This is a book-length interview I conducted with Gardner covering all his short fiction, story by story, in the order published, from "The Empty Man" ("Sucks! is the way we describe it in technical language," Gardner summarized) to "A Knight of Ghosts and Shadows," which he began in 1978 and finished twenty years later.

In the interview I asked Gardner what did and didn't work about each story and he he was astonishingly frank, frequently funny, and always insightful.  I think of the book as a kind of postgraduate course for writers.

Also, it has a great cover by Omar Rayyan.  When Gardner's grandson with a little boy, the first thing he wanted to see whenever he came to visit was "the picture of Pop-Pop with the top of his head off."

Available from the usual sources or direct from Old Earth Books.