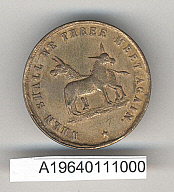 While I was researching a story set in Philadelphia, I came upon the tale of Applegate's Circus of Flying Animals. James R. Applegate was an entrepreneur who had made a fortune with daguerreotype studios.  In 1890 bought the First Moravian Church in the Tenderloin district and erected an indoor carousel in the churchyard.  A circus of flying animals being simply a poetic  way of saying merry-go-round in the newspaper advertisements.

The attraction quickly became a playground for children during the day and adults at night.  For one half of the wooden structure housed an enormous theme bar, with waiters dressed as clowns, waitresses in tights, and waiters dressed as circus strongmen.  Also prostitutes -- lots and lots of prostitutes.  Which was convenient because there were also rooms on the second floor which could be rented by the hour.

Things got lively, the Moravians (who were allowed to stay in their church while they scouted out a new one) were upset, city reformers and the police got involved . . . and the building burned down.  James Applegate was on trial for running a disorderly house at the time, but the d.a. cut a deal letting him off with a suspended sentence because many of the young girls working for him had returned to their families and the shock of having to testify might force them back on the streets.

Mr. Applegate was known to be very generous to police officers and other members of the legal community.

This charming story can be found in more detail in Wicked Philadelphia: Sin in the City of Brotherly Love by Thomas W. Keels.  A book I am enjoying enormously.

The church and all the neighborhood around it were razed long ago.  All that remains is Franklin Square.  Which today includes a very nice carousel.

The merry-go-round token above, showing two asses and bearing the evocative slogan When Shall We Three Meet Again? is in the collections of the Smithsonian Institution.  Not in the National Museum of American History, as you might expect, but in the National Air and Space Museum.

That word "flying" misled them, apparently.