.
So today I was standing by the French bread oven in Port au Choix when Gail said, "I hear something snorting in the woods."  At which cue, the branches shook and out strolled a moose. 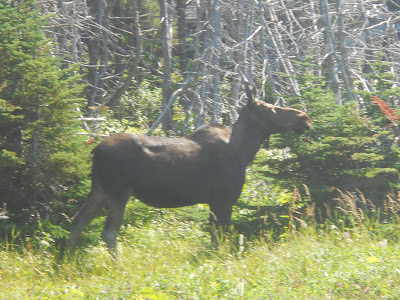 We backed away carefully, because she was only a short and savage charge away.  And then more trees trembled and there her calf. 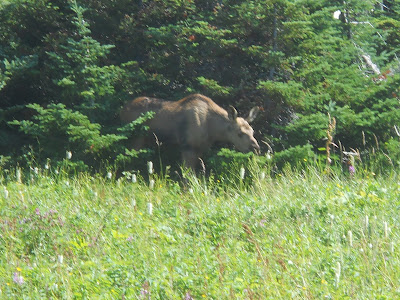 Followed shortly thereafter by a second calf which we never got a clear snapshot of.  But who could complain an this point?

So, feeling pretty good, we started toward an archaeological site named Philip's Garden.  But partway there, we had to stop for a while to view the whales sporting in the distance.  Here's a shot of the fearless whale viewers: 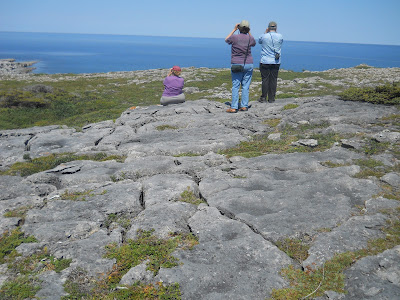 After which, because today is a travel day, we hopped into the car and made our way down the coast.  At Torrent River, we stopped in the Salmon Interpretation Center, where we viewed the fish ladder through a window.  Here's Marianne: 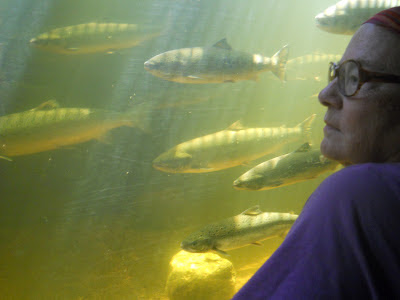 Then we went down to the river below the falls, where Rob said jokingly, "This would be a good time for a salmon to leap out of the water."  Which one promptly did.  Twice.

That's a threefer.  I hope your day was equally happy and every bit as joyous asours