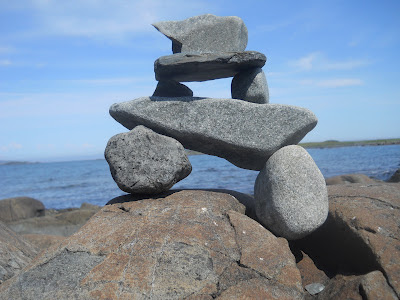 Taking a reluctant leave of Dot and Madge, the cooks at Viking Village B&B.

Having lunch by the thrombolites of Flower Cove.

And, most of all, chancing upon the Welcome Home Year games at Castors River.  We just missed the snowmobile races around the pond and since I had no idea those things could buzz across the surface of water, I was sorry to have missed it.  But we caught the cardboard dory race . . .  All boats made on-site from cardboard boxes, Styrofoam, light wood for bracing, and duct tape.  The ref waded out into the pond and the winner was to be the first person who rounded him and made it back to shore.

The referee shouted and the race was on!  Such a farrago of paddling, cheating, sinking, and boats folding in two you never saw in your life.  Everyone had a great time, the spectators included.  And I had a very pleasant conversation with a Newfoundland expat who now works in Ottawa but had returned to visit family and friends.  Lots of info on life thereabouts and what winters in Newfoundland are like -- aided by anecdotes from a friend in the public works service about digging out the roads with a front end loader.

Pretty much everybody here is somebody you'd like to be able to see once a week, buy a few drinks for, and then get to talking so you could listen.

And the trip has just begun.  I'll try to keep you informed.  But, as I said I can only convey a fraction of it.

Above:  At the tideline of L'Anse aux Meadows, tourists pile up rocks in imitation of Inuit territory markers.  This is one of the better ones.

Was reading the news when I saw this and remember seeing them posted on your blog. Thought you would like to know where this has ended up.
http://www.bbc.co.uk/news/world-europe-19082875

I'm shocked. This makes me fear not only for these three women but for the future of Russia. If anybody knows of any effective action that can be made in support of the defendants, please let me know, okay?