Great Two-Hearted Beast of the Archipelago 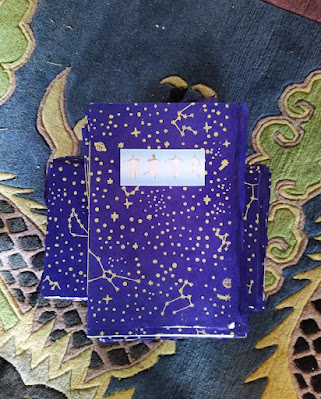 There are still copies available of Dragonstairs Press's latest chapbook, The Lonely and the Rum. This was by design. Marianne's last several publications sold out fast, within an hour of being put up for sale, and Marianne to have something available on the Dragonstairs web page between publications.

The Lonely and the Rum is a conversation that Greer Gilman and I had at this year's virtual Boskone. We went into it knowing only which writers we particularly wanted to discuss.

Here's how the conversation began (I'm talkier at the opening than Greer, but overall we spoke a roughly equal amount):

Michael Swanwick: All right. I’m Michael Swanwick and this is Greer Gilman. Greer and I enjoy having conversations about fantasy together. I believe that we really understand each other’s take on fantasy very well. Today, we want to talk about several writers whom we consider to be unrelated to anybody, much less each other. They seem like writers it’ll be productive to discuss.

I was thinking about fantasy and it occurred me that there is one central thing that defines all fantasy and that is J.R.R. Tolkien. We all know the reasons why Tolkien is considered to be the very heart of fantasy and why, consequently, most fantasy is judged by how close it comes to being J.R.R. Tolkien. So George R.R. Martin is considered really close not only because he has an R.R. in his name, but also because his work has lots and lots of swords. All the works commonly considered to be right at the heart of fantasy have swords and armies and such. But the books we’re going to be discussing don’t have swords at all, not even hanging on the wall. Also, they’re all outliers. Theirs is a completely different approach to fantasy. It is much quieter, much gentler, but no less savage, I think. If you take them all together, they are the other heart of fantasy. If we start looking at fantasy as a great two-hearted beast, then I think we’ve got a better handle on what's going on overall.

Greer Gilman: We're talking about fantasies that are like nothing else. I think it's important to remember that Tolkien started as a one-off and became a pattern: what fantasy is. But for years and years people like him were writing mad individual visions. They’re like Gerard Manley Hopkins, who was way off the mainland when he was writing and then became a piece of the continent. I think what connects all these books is their unlikeness to anything else. There are literal islands in these books, and their stories deal with isolation, self-sufficiency, who’s included, who’s walled out. Captivity, flight. So, we're going way off the mainland. Welcome to the archipelago.

Michael Swanwick: Who shall we start with?

Greer Gilman: Can I start with Sylvia Townsend Warner? Because she…

So now you know whether you need this or not.

It was, in my absolutely unbiased opinion, a wonderful conversation and, taken as a whole, the chapbook is a publication that stands alone in its eccentricity.

If you're interested in buying a copy, you can find it at the Dragonstairs Press website here. It costs $15 shipped within the US and $18 elsewhere. Which is scandalously reasonable for a hand-crafted chapbook of this quality.

Here's what it says about The Lonely and the Rum on the Dragonestairs website:

The Lonely and the Rum is a conversation between Greer Gilman and Michael Swanwick, that was part of the virtual programming for Boskone 2021. These two masters of fantasy explored the virtues and dissimilarities of the works of P. L. Travers, Stella Benson, Tove Jansson, and Sylvia Townsend Warner, among others. The only limit was the 50-minute programming cutoff. The transcript was lightly edited by Swanwick and Gilman.

The Lonely and the Rum is 5 ¼ x 8 ½ inches, hand stitched, numbered, and signed by Gilman and Swanwick. The wrappers are silkscreened lokta paper from Nepal, with a cover illustration by Susan McAninley. It is issued in an edition of 125.

Posted by Michael Swanwick at 7:31 AM