She Saved Us From World War Three 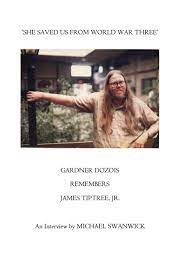 How many feminist science fiction writers does it take to save the world?

One. Her name was Alice Sheldon and she pulled us back from thermonuclear fire before she wrote her first science fiction story.

Today is the birthday of Alice Sheldon, which is not necessarily the birthday of James Tiptree, Jr., the pen name under which she wrote some of the most scathing and brilliant stories SF has ever known. (That would be the day she lifted up a jar of Tiptree jam in a supermarket and thought: Hey, that would make a great pseudonym!) In my opinion there are two ways you can best celebrate it.

The first is by reading James Tiptree, Jr.: The Double Life of Alice B. Sheldon by Julie Phillips. I could gush about the book but, alas, I haven't the time. Suffice it to say that when, shortly after publication, I told the late editor David G. Hartwell that it was the best biography ever written about a science fiction writer, he replied, "No, it's the best biography ever written about a writer."

If you knew David, you would understand what high praise that was.

The other is by reading the Temporary Culture chapbook She Saved Us From World War Three: Gardner Dozois Remembers James Tiptree, Jr.

1. A short but significant interview that I did with Gardner about his relationship with Sheldon/Tiptree. They were important to each other. Gardner was pretty much the first to celebrate and promote Tiptree. He was in awe of his/her work. In return, she would call him late at night when she was alone with her shotgun, contemplating suicide.

2. Henry Wessells' engaging note on the Gardner Dozois papers in the Eaton Collection at the University of California Riverside.

3. Two letters from Sheldon to Dozois. In the first, she tells him that she is not Tiptree but a woman using that persona as a mask, ending "Let me know if you're still talking to [...]" In the second, she reacts to his response with relief, calling him "a sweet & generous soul." It also, ominously in retrospect, mentions the Fox C.E. 12-gauge double barrel double choke as a youth.

4. Fold-out facsimiles of the original letters.

It's an extraordinary document and it's still available for sale for twenty dollars from Temporary Culture. As such things go, a bargain. The day it goes out of print, the price will soar. I say this as one who failed to buy limited items and shortly thereafter discovered I never would.

You can buy the chapbook here if you wish. Or just read about it and then poke about the website. It's an interesting place.

Also, don't forget about the Julie Phillips biography. It's a terrific book. When I finished reading it, I thought to myself: I now understand Alice Sheldon better than she ever did.

Yes, she really did save the world. But to find out how, you're going to have to read one of the above publications.

Posted by Michael Swanwick at 4:46 PM

Thanks, Michael. I read GD's book-length treatise on Alice Sheldon, and just scored the chapbook. (If I glance left, I see Dr. Sheldon's beautiful face on the spine of Ms. Phillips's wonderful biography.)

She was a looker and so was her mother. I remember Hartwell showing me a photograph of a quite striking woman and saying that they knew it was of one of them, but not which.

Thank you for mentioning the biography - I picked it up yesterday based on your recommendation and finished it just minutes ago. Sad, wonderful, clever beautiful person....