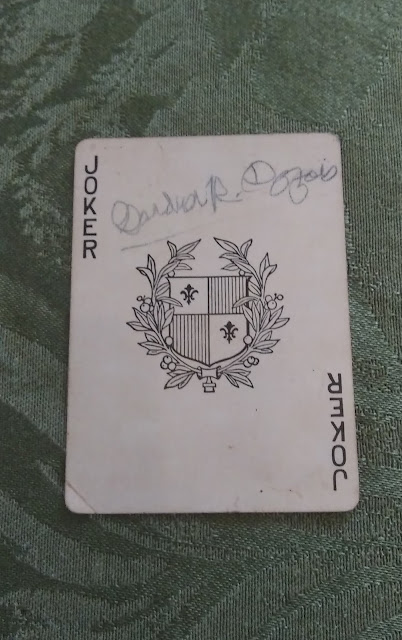 This is the first in an occasional series of Things I Own That You Probably Don't.

Back in the late 1970s, I lived on 23rd Street in Center City, Philadelphia. Every Thursday, I hosted a cut-throat Hearts game. Usually, either I won or Susan Casper did. Susan, it has to be said, won more often than I did. She was a shark.

Among the regulars were a young woman named Marianne Porter and a distinguished elder writer (he must have been--my God!--all of 30 years old) named Gardner Dozois. Neither of them was an enthusiastic games-player so when they could, they sat apart from the player and chatted.

For some reason, whenever I broke open a new deck of cards, I got Gardner to autograph the jokers. Which he good-naturedly did.

Où sont les jokers d'antan? Gone with the snows. Yet one miraculously remains.