The Postutopian Adventures of Darger and Surplus 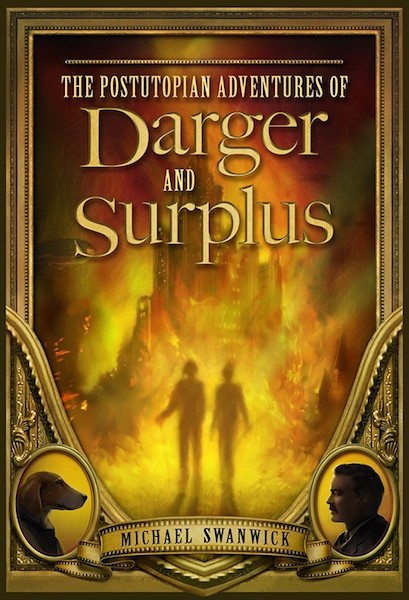 It's official! Subterranean Press has announced the April publication of The Postutopian Adventures of Darger and Surplus. The book collects all the short fiction I've written to date about my favorite con men at the dawning of a new age, sometime in the future.

This is an elegant and slim book. It contains four previously published stories, a quartet of linked flash fictions, and a story new to this collection titled, "There Was an Old Woman," which chronicles how Darger came to be eaten by a dragon and what happened next.

The book costs $40, which is not cheap--but is quite reasonable for a signed and numbered hardcover offered in an edition of one thousand.

It's  available for preorder now. You can go to the link below or just begin at SP's home page here and wander around yearningly. There are some very desirable books there.

Scoundrels and wit. It's hard to know which should come first in describing Michael Swanwick's stylish new collection, The Postutopian Adventures of Darger and Surplus.the first volume to center solely on his adventurers with, shall we say, a flexible moral position.

The world is grown strange.

Gloriana, the six-brained Queen of England, squats in her throne room at the center of Buckingham Labyrinth. In Paris, the glowing Seine may, or may not, conceal the disassembled remnants of the Eiffel Tower. A dragon haunts the high passes of the Germanic states, swallowing travelers whole for purposes impossible to understand. All these signs and portents together mean but one thing to the forgettable-faced Aubrey Darger and his humanoid canine partner Surplus.

There is money to be made.

Here are five novelettes and four never-before-collected vignettes that describe episodes from the careers of those most charming of con artists, Darger and Surplus, spiritual heirs to Fafhrd and the Grey Mouser and unwitting agents of change in a world where ancient artificial intelligences scheme to destroy the descendants of their makers. The comrades’ adventures across a wildly detailed world by turns astonish and delight.

The Hugo Award-winning “The Dog Says Bow-Wow” tells the tale of the redoubtable pair’s first confidence game, played out at the dizzying heights of English society. In “The Little Cat Laughed to See Such Sport,” Surplus works to overcome his prejudice against Darger’s new lover, a member of that most contemptible and capricious of races, cats. Gods walk a future Arcadia in “Girls and Boys Come Out to Play,” tables are turned by the formidable woman who lends her name as title to “Tawny Petticoats,” and Darger and Surplus are separated as each attempts to thwart the machinations of a most unique AI “There Was an Old Woman,” which debuts herein.

The collection closes with “Smoke and Mirrors,” four brief episodes that lend nuance to all that has come before, expanding our understanding and appreciation of this world and of these unforgettable roguish characters.

Michael Swanwick is one of the most celebrated and decorated writers of the past forty years. His novels and short stories have won the Hugo, the Nebula, the World Fantasy, the Locus, and the Theodore Sturgeon Awards, among others. His inimitable imagination and consummate skill are on full display in this collection, so revel in the postutopian world with its finest guides. Just check your pockets afterward.