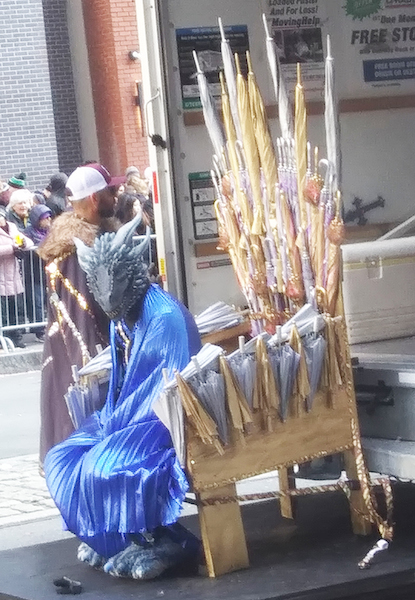 I'm a big fan of the Mummers Parade. In fact, my first novel, In the Drift, was inspired in part by the parade. But it starts early in the morning and is held in January, so usually I only get to see a few hours of it. So this year, Marianne and I rented a hotel room on Broad Street, so we could periodically go indoors to rest and warm up. It worked beautifully.

Over on Facebook, I posted a lot of photos and if I began talking about only a few of them, we'd be here all day. So I will only mention that the Jacks New Years Brigade, a comic club, put on a homage to Game of Thrones titled Queen of the North which I loved, loved, loved.

You can find their performance by going here and scrolling down to Jacks NYB. See how many of the characters you can spot. Then watch them all be upstaged by five children in yellow parkas and mustaches. Worth watching for that alone.

Marianne and I used to go watch the Mummers until we were too cold to continue and then go to Gardner Dozois' and Susan Casper's  apartment to watch the reset on Tv. People came and went. Food was served. Everybody pontificated about our favorite groups and complained about the cluelessness of the judges. Gardner shouted rude things at the TV. It was enormous fun.

I really regret that Susan and Gardner aren't around anymore because I would have loved to hear what they'd say about the Mummers celebrating the work of their old friend George R. R. Martin. Something funny that George would have enjoyed hearing.

What if Darth Vader was the captain of the Fralinger String Band?. You can bet he'd put on a tight show. Fans of media science fiction can find the whole glorious mosh-up here. 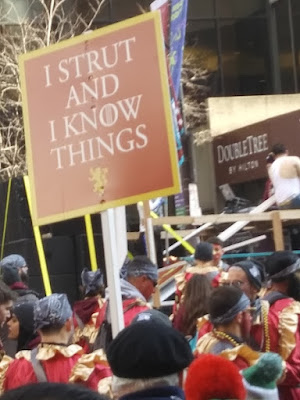 Posted by Michael Swanwick at 10:20 AM