Tom Wolfe and the Legion of Space 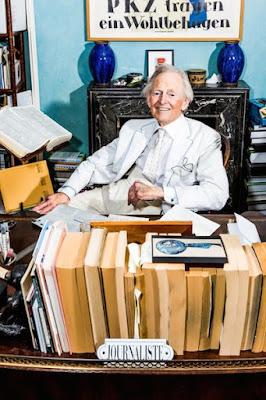 The man in the white suit has left the building.

Tom Wolfe distinguished himself early as one of the giants of the New Journalism. His prose was vivid, lively, and, like his choice of clothes, drew attention to itself. It was full of interjections and exclamation marks ("Zap! Pow!"), CAPITALIZED WORDS, and run-on pyrotechnics. Wolfe wasn't afraid to take more chances in a single sentence than some writers would risk in their entire careers. He was willing to go against received wisdom as well. At a time, he later wrote, when the intellectual consensus was that America was suffering from anomie and alienation, he realized that it was undergoing "a revolution of joy." People everywhere were investing their lives in things like custom car modding or stock car racing. Just because they enjoyed it! This was not your father's anomie.

I've always had a special fondness for The Electric Kool-Aid Acid Test, in which Wolfe rode cross-country with Ken Kesey and his Merry Pranksters in a psychedelic-painted school bus, wildly over-mythologizing the LSD-fueled adventure. It was easily the second-best attempt to capture the feel of the Sixties, after Richard Farina's Been Down So Long It Looks Like Up to Me. But the very best book the man ever wrote was The Right Stuff.

Or perhaps I should say half-book. Wolfe intensively researched the U.S. Astronaut Corps, their test-pilot backgrounds, their families, their individual lives. And he wrote vividly about it all (except, it has to be said, for the wives, who are presented as conventional suburban housewives). But The Right Stuff, which was a best-seller and made into a major movie, stops about halfway through the story to date. Wolfe, who ended the book with a passage demonstrating that he clearly preferred test pilot Chuck Yeager over the astronauts, decided the book had done its work and abandoned the remaining research.

This is a pity because it left a number of the astronauts convinced that Wolfe had done a hatchet-job on Gus Grissom, the second American in space and the first to lose his craft, the Liberty Bell 7 when it capsized and sank after its ocean landing. Grissom was suspected of panicking and blowing the hatch early (he was later fully exonerated) and Wolfe leaned heavily on his personal humiliation and sense of disgrace. But if you look at the text with a writer's eye and a knowledge of what came later (he flew flawlessly in a Gemini capsule which he had named the Molly Brown, and later along with Ed White and Roger B. Chaffee died in the Apollo 1 fire) it was clear that Wolfe was setting him up for a classic tale of personal redemption.

The book, incomplete though it is as a history, is the best way to get a sense of what it was like to be astronauts in the early years, their fight to be real pilots and not juste "Spam in a can," and the strange fortune of being able to be world-famous fir a few days a year and for the rest of the time anonymous, hard-drinking, automobile-destroying jet jocks for the remainder.

Wolfe went on to become a best-selling novelist. I have to admit that I've never been able to get very far into his fiction. The wonderful lightness of his non-fiction just isn't there and his puritanical streak when it comes to sex most definitely is. Others may disagree with me. Certainly, those books, starting with Bonfire of the Vanieities, sold in huge numbers.

So was Tom Wolfe a great writer? At a minimum, he came close. By my estimation, he was semi-great, the author of some great journalism, some wondrous non-fiction books, and a partial history of the early space age that should remain of interest for thousands of years to come and quite possibly forever. But, as I said, others may want to esteem him higher. If so, please feel free.

Hot jets and clear skies, sir. We thank you for your service.


And instead of another boring obituary...

You can read an interview with Wolfe that Rolling Stone has placed online here. It's lively and cheerful and gives a better sense of the man that the gloomy recaps are likely to.


Above: Photo swiped from the Rolling Stone piece.


Posted by Michael Swanwick at 3:44 PM

Thanks for the tip re Richard Farina's "Been Down So Long It Looks Like Up to Me". I LOVE to listen to the young Joan & Mimi singing together, & somehow missed husband Richard's memoir.

I saw the Magic Bus when it visited the Rice campus in Houston circa 1966, where Kesey was visiting his pal Larry McMurtry. My most spectacular misstep as a Rice freshman was taking English 100 from some BOF instead of Larry. Oh well, he claims he wasn't much of a teacher. Hell of a writer though .....

"Been Down So Long It Looks Like Up to Me" is a novel rather than a memoir. But Thomas Pynchon, who knew him in college, wrote that most of the events were autobiographical. So it's close.

The best Sixties memoir I know of is Emmett Grogan's "Ringolevio." He was one of the Diggers in San Francisco back in the Summer of Love. But the rest of his life was even more remarkable.