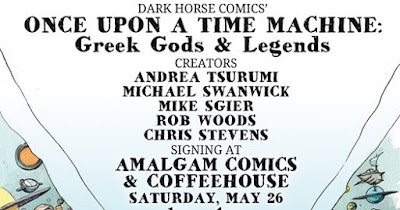 Tomorrow, at Amalgam Comics & Coffeehouse, I make my first appearance ever in support of a comic book story. "The Long Bow," is, not coincidentally, my first foray into the graphic art medium and it appears in Once Upon a Time Machine: Greek Gods & Legends, the second volume in what has been, so far, a very successful series.

My story is a twelve-page reinterpretation of the Odyssey and one that addresses the enigma of Odysseus's bow. I. e., how is it that a man who in two of the founding documents of Western literature is often called "sly," "crafty," and "wily," but never "superhumanly strong," has a bow that no one but he can string?

Once it's put that way, the answer seems kinda obvious, dunnit?

Anyway, it ought to be fun. Everybody who's been there speaks very highly of Amagam. So I'm looking forward to seeing it.

If this sounds like your kind of thing, why not drop by?