The Evolution of the Martini on "Five to One" 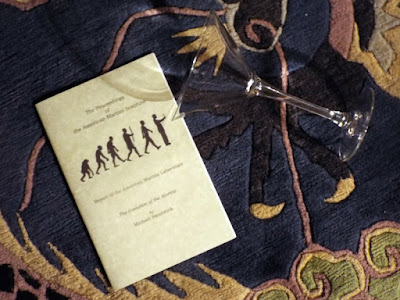 Dragonstairs Press, which I occasionally have to remind everybody is not my press but my wife Marianne Porter's, is about to release its latest chapbook -- non-fiction this time.

Text by me. Cover illo by Susan McAninley. Who did, by the way, a splendid job. The chapbooks are issued in an edition of 60, individually numbered and signed by me.

Marianne finished stitching the last of the chapbooks today. But they won't be available until May 21st, 5/21, or "Five to One," Dry Martini Day. That's next Monday.

The last chapbook Marianne did, Blue Moon, was issued in an edition of 69 and went on sale on March 31 of this year. Because the plan was to burn all unsold copies at the end of 24 hours, they went on sale at midnight. Because the best laid plans gang aft agley, the chapbook sold out before dawn.

That's Marianne's plan, anyway. I offered to bet Sean (our son and her IT team) ten dollars that it would sell out in a day and he said, "Mama Porter didn't raise no fools! Not taking that bet!"

Come Monday, you can buy one -- if you wish -- at www.dragonstairs.com.

I'm on the road again. This time I'm off to the Nebulas to witness the Kate Wilhelm Solstice Award being presented to Gardner Dozois and Sheila Williams, both very dear friends of mine.

I'll be reporting on the Nebs either this weekend or on Monday, depending. Alas, I will not be dishing the dirt on who behaved badly and other scandalous matters. John Scalzi might, but not me.

Because I am such a wuss.