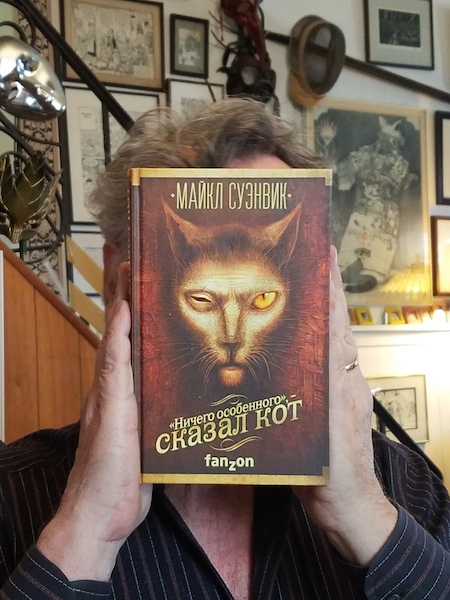 Look what came in the mail!

This is the Russian edition of my short fiction collection Not So Much Said the Cat. The cat in question being Beelzebub ("Not the famous one, obviously," as he himself observed) from "Of Finest Scarlet Was Her Gown." In the story, a young woman named Su-lin follows her father to Hell and tries to win him back. Beelzebub was a "scrawny, flea-bitten, one-eyed disgrace of a tomcat" with a trashy way of talking. Quite frankly, he's my favorite character in the study.

The Russians, in my experience, always make attractive-looking books. One thing I particularly liked about this one was how demonic Beelzebub came out. The character was inspired, in part, by the demon cat Behemoth in Mikhail Bulgakov's great novel, The Master and Margarita. Bulgakov's character wore a bow tie, toted a Browning automatic, and, frankly, was a greater creation than mine. But Behemoth's blood flows in Beelzebub's veins.

I'm pretty sure the illustrator spotted that. And I'm grateful for it.

In the same mail were contributor's copies of the Russian translation of Dancing With Bears. This was the first Darger & Surplus novel and I'll confess to being curious as to what the Russian SF readers make of it. In their first adventure, back when they appeared only in short fiction, my two Post-Utopian con men accidentally set fire to London and then set off for Russia to pull the con of their careers on the Duke of Muskovy.

An American and a Brit single-handedly invading Russia? As Napoleon once said, "What could possibly go wrong?"

Or, as Marx said, "History repeats itself -- first as tragedy, then as farce." I wish I'd thought to use that as an epigram for the book.

Here's the cover, steampunk samovar and all: 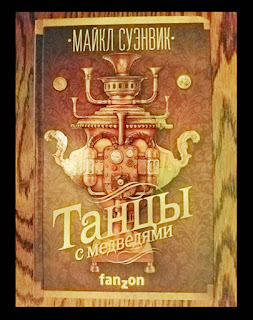