Writers and the Mail 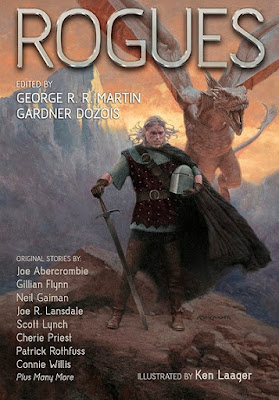 Writers have a passionate relationship with the mail. I recall visiting a friend who was a writer and who lived in an apartment where he could hear when the mailman delivered the mail. We'd be talking, there'd be the sound of mail, and up he'd leap. If his wife was there, she'd snap, "Sit down! The mail will be there later. Why do you always have to make such a fuss over the mail?"

Then my friend's wife made her first sale. And my friend was never again the first person to reach the mailbox.

All of which is prelude to my saying... Look what came in the mail!  It's the Subterranean Press limited, oversized edition of Rogues, edited by George R. R. Martin and Gardner Dozois. Slipcased, with a stellar lineup of fiction, and a cover and interior illustrations, all pretty nifty, by Ken Laager.  Autographed by both editors and all the authors. Issued in a limited edition and a lettered edition, both rather pricey and both already sold out. Pretty much immediately, apparently.

Luckily for me, I had "Tawny Petticoats," a Darger & Surplus story in the volume, so now I own a copy.

I also get money in the mail. But it's little perks like this that make the whole process so much fun.

I remember Heinlein writing something like "The high point of a writer's day is generally just before the mail arrives. The low point is generally immediately after."