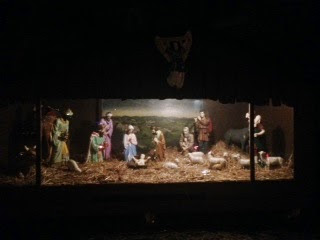 Did everybody have a pleasant Thanksgiving? I hope so. Here in Roxborough, we had the traditional combination of family and food and happiness, just the way things are supposed to be. If I could carry away but a single image of the day, it would be Sean taking Aunt Evangeline into the back yard to show her the laser lights. At his urging, she raised her arms and saw how the lights flowed over her, as if she were afloat in some otherworldly cosmic ocean.


Now the one holiday is done and the Christmas season begun. I am old enough that I can remember people being shocked when stores put up the Christmas decorations immediately after Thanksgiving. Today, when they start going up, this seems wonderfully naive.
Well... times change and our perceptions of time with them. In years past, I've posted "The Parable of the Creche" on Christmas Eve. But this year, I plan to replace that traditional retelling with a more sentimental one.  So here, a month earlier than used to be, I reprise...

When first I came to Roxborough, a third of a century ago, the creche was already a tradition of long standing.  Every year it appeared in Gorgas Park during the Christmas season.  It wasn't all that big -- maybe seven feet high at its tip -- and it wasn't very fancy.  The figures of Joseph and Mary, the Christ child, and the animals were a couple of feet high at best, and there were sheets of Plexiglas over the front of the wooden construction to keep people from walking off with them.  But there was a painted backdrop of the hills of Bethlehem at night, the floor was strewn was real straw, and it was genuinely loved.

People were upset of course.  Nobody liked seeing a beloved tradition disappear.  There was a certain amount of grumbling and disgruntlement.

But did this make us happy?  It did not.   The creche was just not the same, located in front of a church.  It seemed lessened, in some strange way, made into a prop for the Presbyterians.  You didn’t see people standing before it anymore.

I was in a tappie shortly after the adoption and heard one of the local barflies holding forth on this very subject:

Posted by Michael Swanwick at 6:57 AM