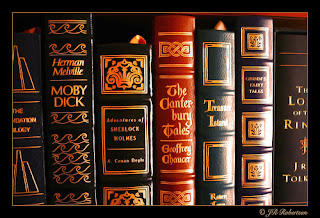 I don't cite John Scalzi's blog much because... well, his blog readership is phenomenal, so I presume that any of my own blog's readers who are interested in anything he has to say have already checked it out.

But he had an eminently reasonable essay yesterday on the classics of science fiction and why he doesn't expect the young to be reading them. Essentially, he said that it shouldn't surprise anyone that young people would prefer books written specifically for them, rather than for their grandparents. That kids want their own books, their own futures, their own amusements. That bookstore shelves are only so long. And that a lot of today's science fiction is as good as any of the classics, so they're not necessarily missing anything.

All true, of course, and sweetly sensible. But I wanted to add two thoughts.

The first is that we habitually talk about the "classics" of science fiction, but of course they're no such thing. Classics are works that have stood the test of centuries. Science fiction was, as Barry Malzberg has observed, a single-generation invention, the creation of men and women who not so long ago were alive and getting plowed at science fiction conventions. When they originally used the term, it was with a mixture of defiance and irony -- chin forward and tongue in cheek.

The disregard of the young is just an early phase of the testing of science fiction's best books o see which will really turn out to be classics.

The second thought is that, while young readers can ignore the classics, young writers do so at their own risk. Decades ago, a friend who was an amateur magician took me to see Baltimore's oldest stage magician, a classic ham whose hands had begun to tremble, whose vision was weak, and whose reflexes were much slower than they used to be.He couldn't hide the mechanics of his tricks like he used to. By watching him at show after show, my friend was learning, one trick at a time, how they were done.

Yeah, a lot of the "classic" SF is showing its age. But that only means that the tricks are easier to see, to imitate, and to learn from. I don't think that A. E. Van Vogt is going to have much of a readership a thousand years from now. But that doesn't mean he isn't worth learning from. I once wrote a story playing off of his classic "Recruiting Station" and won a Hugo for it when all I was trying to do was learn how he got his effects. Writers who are reading nobody older than, say, me are missing a great deal of what's going on under the surface.

You can read Scalzi's post (if you haven't already) here.

Posted by Michael Swanwick at 8:58 AM

"...getting plowed at science-fiction conventions..."

I could name names.