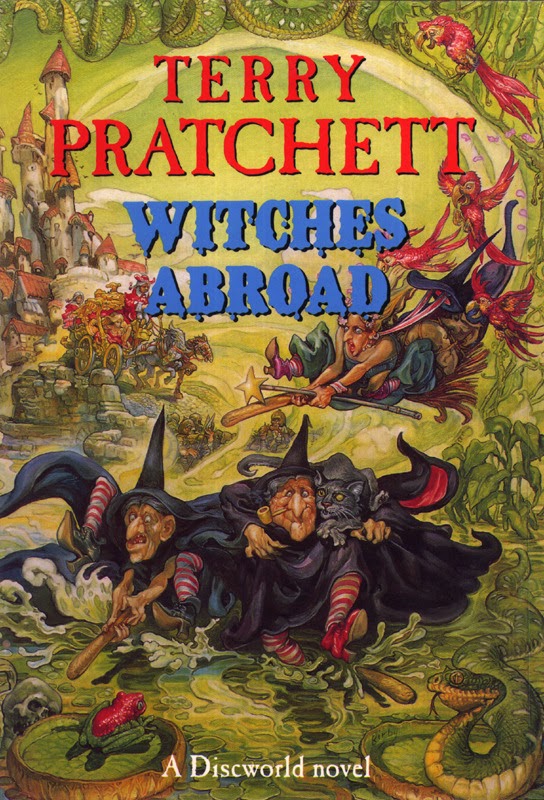 I'd met Terry Pratchett a few times, at awards ceremonies and the like.  He was pleasant, a little reserved, and it was clear to me that he wore his signature hat chiefly to hide a bald spot he was touchy about.  But you couldn't say I knew him.  So, to find someone who might say a few words in his memory, I went to a rather shabby funeral parlor in the Ramtops where a rather shabby group had gathered for a rather shabby wake.  They all wore black.  They were all, within a rather loose definition of the term, women.

There was a sideboard cluttered with food.  I took one glimpse at the sausage and quickly looked away.  "So tell me --"I said to the nearest witch.

"It's a terrible loss, to be sure, dearie," Nanny Ogg said.  "But at least she didn't go out cackling."

"Why, Granny Weatherwax, to be sure.  Who else would we be gathered here to mourn?"

A sudden silence came over the room as everyone looked over their shoulders.  Then, when nothing happened to any of them, they all sighed in mingled sadness and relief.

"That's it, then.  She's well and truly gone."  Nanny Ogg topped her teacup and every other one in sight from a flask.  "Drink up, while I thinks of a muffin in her honor."

"You'll do the same as you ever did.  You think that just because somebody did you a good turn or ten, they have an obligation to hang around forever, at your beck and call?  It ain't healthy!  Let her go, lace up your boots, shoulder your rucksack and get on with it.  That's what she'd have wanted you to do."

I cleared my throat.  "Actually, I came here to get a quote from you about Terry Pratchett."

"Never heard of the sot!"

"He was a writer," I said.  "The best at what he did, much admired, greatly beloved, profoundly mourned.  He left behind something like seventy books."

Nanny Ogg took a huge bite of sausage, and then belched with prolonged satisfaction.  I did not know which would haunt me the longer -- the sight or the smell.  "Oh.  Well, then," she said.  "The same goes for him, I'd reckon."