The Adventures of Mr. Chesterton and Yaa Asantewaa in China 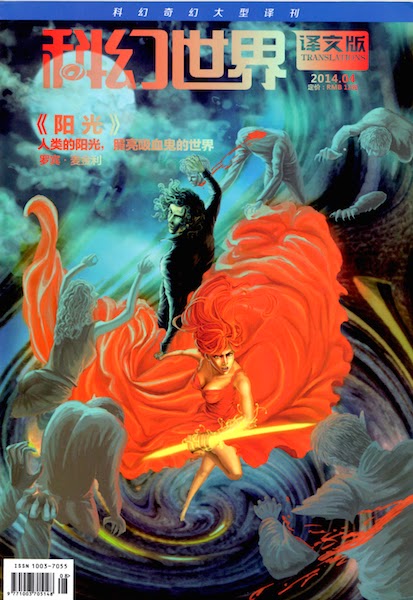 I'm in print again.  In China!  The story in question is "The Trains That Climb the Winter Tree," which I co-wrote with the brilliant Eileen Gunn, and which features murderous elves, a talking dog named Mr. Chesterton who is more than he appears, sibling loyalty, a toy train that carries the plot to the stars for a confrontation with a murderous avatar of Entropy, and the comic book adventures of Yaa Asantewaa Warrior Queen.  Among other things.  It's an odd story, if a warm-hearted one.  And the publication is Science Fiction World.

I could joke and say that Science Fiction World is my favorite Chinese SF magazine, given that so far as I know it's the only magazine in China dedicated entirely to science fiction.  But in fact, it's one of my favorite SF magazines, period.  I've had several stories published there, and it always elates me when it happens again.  I've even visited their offices in Chengdu.  Somewhere, I've got the photographs to prove it.

I was also, for a time, a monthly columnist for SFW, explaining the world of science fiction to young readers who were going to be taking an increasingly active part in that world.  So I feel that I'm a part of the magazine's extended family.  The strange uncle who shows up once a year and nobody is exactly sure how he's related, perhaps.

The cover you show there is for the April edition of SFW's Translations publication. But the most recent one (July) also has a story by you that appears to be "Passage of Earth". They don't have the English title written on the SFW website (they didn't literally translate the title into Chinese, if that's even possible), but I can infer what it is from the cover art and the description, which refers to aliens.

So, double the good news?

I knew the story was in the works (because I was paid for it), but not that it got the cover. Very good news indeed!