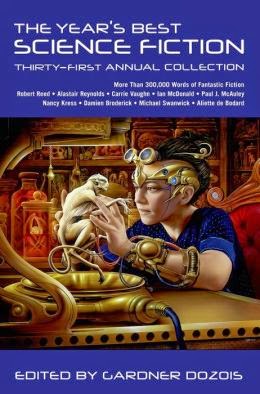 I long ago arrived at that happy state where I don't bother keeping track of what stories I have coming up in the year's best anthologies.  I usually have at least one, so that's good enough for me.

It also means that when such a volume arrives in the mail, it comes as a pleasant surprise.


This story was written for Shadows of the New Sun, a festschrift (great word, innit?) honoring Gene Wolfe.  For it, I took the opening paragraphs of his very great "The Fifth Head of Cerberus" and reversed everything.  I turned evening to morning, summer to winter, the north wing of the house into the south wing . . . and, most significantly, the two brothers to two sisters.  Then I wrote a story that I imagined in some alternate reality the great female writer, Jean Wolfe might have.

But because I should say something about my story, I'll give you the following short paragraph from it:

That was the summer when Susanna conceived a passion for theater.  She went to see Riders to the Sea and Madame Butterfly and Anthony and Cleopatra and The Women and Mrs. Warren’s Profession and Lysistrata and Hedda Gabler and The Rover and I forget what else.  She even got a small part in The Children’s Hour.  I attended one rehearsal, was not made to feel welcome, and never showed up again.


I'll bet most readers breezed right past that without giving a thought to what those particular plays had in common.  But writers almost never craft such lists without purpose.  It's one way of keeping ourselves amused in what can be at times a long and dreary task.

One of Gardner Dozois' many innovations over the year is his honorable mentions list of stories he found particularly worthy over the previous year but could not include in his  volume.  This was born, I'm sure, from the long handwritten list he keeps on a lined yellow legal pad.

Not to sound immodest, but I usually have a couple of stories listed there.  (Seriously, I'm not braggingt; I have nowhere near the number that Robert Reed has listed every year; and this year Ken Liu has nine stories listed, Nancy Kress has eight, and Lavie Tidhar has eleven.)

This year, however, I'm particularly pleased that one of my two listed stories is Tumbling, which was published as a small, cunningly cut-and-folded booklet by Dragonstairs Press. in an edition of 50 signed and numbered copies.

The founder, publisher, editor, and sole proprietor of Dragonstairs is Marianne Porter.  Who commissioned the story from me.  And who is my one true love and my wife to boot.

"Anthony" rather than "Antony," eh? I don't suppose that's significant.

Oh, blork. Thanks for spotting that. I've made the correction in my efile.

Do they all have female protagonists?

They are all about the condition of being a woman.

I recently completed a write up on Wolfe's Many Mansions, which I feel is kind of a female Fifth Head, so I took some time at the end to talk about your story, mentioning those titles and their thematic implication. http://lists.urth.net/pipermail/urth-urth.net/2014-July/054929.html

Thought you might enjoy it. Thanks for the excellent story.