My Bottled PROSE FOR PEARL 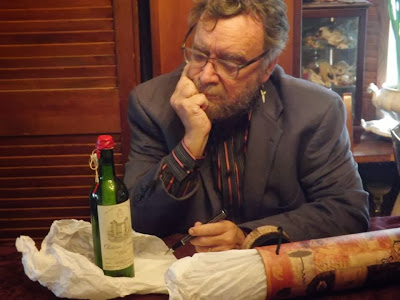 
Michael Swanwick
A one-of-a-kind, completely original story in a bottle.

Swanwick has written an original work of flash fiction called “The Mermaid’s Message” for this auction and placed it inside an old bottle of Chateau Greysac Medoc, which he titled, signed, and dated with a diamond-tipped pen. After corking, his wife added a mermaid’s toenail (Anomia ephippium, also known as a “jingle shell”) on a bit of string and sealed it with sealing wax.
Michael has destroyed all other copies and files of the text, rendering the story within the sealed bottle unique. The bottle can be kept as an artifact, or the story can be read, whichever the winning bidder chooses. Copyright is specifically withheld, so there is no third option.

The opening of the story reads: The mermaid had no name, for that was the way of her kind. Her passions were as cold as her blood and her blood was as wild as the sea. The young fisherman had a name, of course... The only other clue we have is Swanwick’s statement that “young men who fall in love with mermaids rarely come to a good end.  I know there are stories that say otherwise, but they're mostly written by land-dwelling young women who are softer on young men than they deserve.”

Janis says: When I see Michael in my mind’s eye, I picture him sitting at a table in a small, intimate club I played a couple of years ago. I was singing a song called "Mary’s Eyes", and Michael was openly weeping. That picture is engraved on my heart, and it reminds me of what I like best about him – that he’s not afraid to shed tears in a public place, or open his heart to a song.

I call these “Swanwick-in-a-Bottle”, and I actually own the one I’m pictured with here. It was purchased at auction by a fan of mine, who then graciously gave it to me. I keep telling myself that some celebratory day – perhaps when I reach 70? – I will break the bottle and read the story. I’ve been telling myself that for over a decade now, and I still can’t bear to do it. A real one-of-a-kind item, by a master story-teller.

[I should mention that I pretty much never cry in public; but Janis's song -- and Ireland -- can do that to me.]

And here's the whole story of the auction, chopped and customized from the press release:

The auction will take place on the Pearl Foundation’s eBay site.  Click here after the auction goes live.


In the meantime, you can read the whole story, with lots of photos of Janis with her friends (including me; it's been a long time since I wore a Hawaiian shirt, though) here.

What’s unusual about this auction?

--   It was suggested by author George R. R. Martin (Game of Thrones) and his wife, Parris McBride, who are donating a pilot script from the hugely successful television series, signed by all the “Starks”, as well as signed books and personal notes from Martin to the high bidders.

--   The authors are Janis’ friends, and chose the items themselves. Many posed with their items, and sent photos of themselves with Janis for the sale.

--   The items are offered with no reserve.  Each item has a description from the author as well as a short vignette by Ian detailing their relationship.

--   The authors will sign and personalize their items whenever possible.

Just what is the Pearl Foundation?

--   In 1998, Ian held the very first Internet auction through her own website,  raising over $60,000 in college scholarship funds for Goddard College. What begun as a one-time tribute to her mother’s life-long dream of attending college became the Pearl Foundation, an IRS-approved charitable organization dedicated to raising funds for returning students.


Finally, here are the short descriptions of what's up for auction.  There are some tasty items here.  But I'm guessing it's going to be George's script that brings in the big bucks.

1.  Anne McCaffrey
Original galleys for US edition of FREEDOM’S RANSOM, plus “Final Revised Copy” of the manuscript, with handwritten notes by McCaffrey.

5.  George R. R. Martin
An original pilot script for GAME OF THRONES, signed by all the Starks; can be signed and personalized by Martin on request.

6.  George R. R. Martin
Personal presentation copy of A DANCE WITH DRAGONS. Martin has offered to write a note on his personal stationary thanking the high bidder for supporting the Pearl Foundation. Can be personalized on request.

7.  George R. R. Martin
Signed hardcovers of all five A SONG OF ICE AND FIRE novels. Martin has offered to write a note on his personal stationary thanking the high bidder for supporting the Pearl Foundation. Can be personalized on request.

8.  Harlan Ellison
Signed & numbered “Harlan Ellison rat”, from Ellison’s personal collection, and this original print of Ellison holding the sculpture. Both can be personalized to the winner upon request.


10.  Jane Yolen
A signed personalized poem/fairy tale by this award-winning author about the high bidder or someone of their choice.

11.  Joe Haldeman
Signed copy of THE LONG HABIT OF LIVING with a drawing of the winner and a poem about the winner, both by Joe Haldeman.


13.  Len Wein
Signed copy of 1991 Marvel Milestone edition of GIANT-SIZED X-MEN #1, and a “Wolverine claws auction paddle”. Can be signed and personalized.

14.  Mercedes Lackey
Lackey’s own mandolin in handmade case, signed letter about it, and hand-written note by Ian detailing the story of how the case came to be made.

18.  Orson Scott Card
Signed hardcover first edition of SONGMASTER, from Card’s personal collection. Can be signed and personalized upon request.

21.  The family of Pearl Yadoff Fink
A gold Cresaux watch with diamond and ruby surround, presented to Pearl on her graduation by her children, appraised recently at $2,900.00.

25.  Wally Lamb
An original draft page from SHE’S COME UNDONE with Lamb’s handwritten notes; signed 20th-anniversary edition of “SCU”, dust jacket to the first edition; signed first edition of New York Times Bestseller WE ARE WATER, signed copy of COULDN’T KEEP IT TO MYSELF, and an original early article about the publication of Lamb’s first novel.

Has it really been twenty years since She's Come Undone came out?

Whenever I feel that way, I consider the alternative.