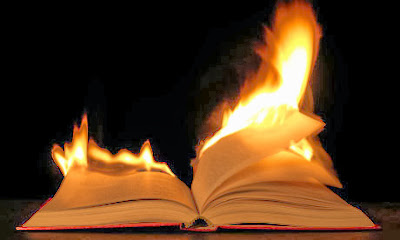 If you want to be terrified by cultural ignorance, you have only to go to YouTube, where an activist went to four major universities with a camera and asked random students what the Holocaust was, what nation Adolph Hitler led, and whether they could define genocide.  One after another, bright and involved students failed to come anywhere near the truth.  (You can find the film here; the questioning begins at 2:22 and I found I couldn't stand to watch very much of it.)

I mention that in order to put this post into perspective.  I'm about to lament how a working knowledge of the history of science fiction and/or fantasy, which used to be common in both genres, has become a rare and endangered thing.  But I don't want to overstate my case.  Compared to well-educated young people smiling in embarrassment and saying, "Gee, I ought to know this," or "1800?" when asked when the Holocaust occurred, this is small potatoes indeed.

Over on Facebook, somebody reported attending a panel of fantasy novelists at Comic Con where a reader asked if any of them were influenced by Lord Dunsany.  None of the writers had ever heard of him.

Once upon a time -- long, long ago in the 1970s -- all science fiction writers and most fans knew the history of the SF genre inside-out.  Lester Del Rey's terrible (and astonishingly sexist; but it would have been a terrible story even if somehow the sexism could've been magicked out of it) "Helen O'Loy" had been read everybody -- because it was a significant work in the evolution of the genre.

Fantasy fans and writers had an even easier time of it, because there was so little classic fantasy back then.  You read the Ballantine Adult Fantasy series as they were reissued under the editorship of Lin Carter,  E. R. Eddison's books, the Gormenghast trilogy, maybe the Conan books, a handful of others and you were done.

Today that's not possible.  Amid the great avalanche of genre being published every year are enough genuinely good books to keep even the most voracious reader satisfied, without having to dip into the past.  But it would be a mistake.

I'm not going to mourn the passage of a more innocent time:  Believe me, we would have loved to have all these new books available back then.  But ask yourself this . . .

Who's more likely to come up with something brilliantly unexpected:  writer who've fed their brains with a steady diet of contemporary fantasy and SF or those who've read Dunsany, Mirrlees, and the other great outliers, and thus has an idea of exactly how strange and varied fantasy can be?

Does contemporary fantasy not have that strangeness or variety? In looking at the books on my shelves (physical and virtual), I see much variety and much strangeness. While it would be awesome to read the early works of SF/F that you and other authors feel are seminal, you seem to forget that many seminal works have been published since then and are just as important. Maybe more important because they come from a cultural perspective nearer our present one.

I see nothing wrong with sticking to the fantasy written by people influenced by Lord Dunsany because I have no interest in reading Lord Dunsany.

Another thing to consider: so much of what is Classic or Seminal in this genre (along with many others) is problematic or inadequate in some fashion. You mentioned the sexism in one story, which is enough to keep me from reading it. You can get past it, perhaps, because sexism doesn't affect you the way it would me. And that's fine and I'm not pointing fingers and calling you a name, I'm just saying it would be a bigger problem for me.

And then there's racism, homophobia, antisemitism, and any number of other bigoted attitudes lurking in those old stories and stories. No, thanks.

Then there's the issue of how much early SF/F is decidedly Western. Euro-centric, US-centric, and all about the superiority of anglo white men. These days there are so many amazing novels and stories that arise out of non-European/non-Western modes of thinking and folktales or myths, why would I bother soaking myself in a history that erases or ignores such things?

I agree that an understanding of the history of this genre is important, but that doesn't mean having to actually read that stuff.

I'm writing now with some young people (not yet 30) who have not read a lot of stuff I would have thought, ah, mandatory. The Lord of the Rings is the one that stands out for me.

Uh. You're a genre writer, and you can't get through Tolkien?

Tolkien has the distinction of being the only author my kids flatly refused to listen to me read out loud. Perhaps my singing voice on the poems songs was what really turned them off. Hah.

SF ages quickly and badly. The great opening lines to Neuromancer, a book I still think as being somehow current, (I guess because we now live in Gibsons dystopia) bout the sky over Chiba city being the color TV tuned to a dead channel…

I can't get that static anymore. The TV senses it and blue it out.

THat wonderful bit where the long row of pay phones ring as the protagonist walks by them, one by one… rows of pay phones?

The Moon is a Harsh Mistress is packed full of pay phones, wired voice networks, and time-shared computing. Even though as early as the Heinlein juveniles characters are shown using satellite portable phones, the notion of this seeping into the culture at every level never occurred to anyone.

The closest I can think of an SF writer predicting the nation of zombie-shuffling smart phone people is a Fritz Lieber story about these personal computers that end up being carried around on people's backs as they become sentient and eventually evolve into separate species.

I like to squint my eyes, and pretend that Heinlein's pneumatic tube micro film library network was a rube-goldberg, steampunk version of the internet… only of course, it wasn't, there's no user generated content, just real books by real authors and real newspapers written by real journalists in that network. No bloggers or memes or twitter revolutions.

Maybe it's up to writers of your stature to compile a list, create a canon, of books that you/we want new genre writers to read; we lack the infrastructure of mainstream academia to distill out a list of hard-to-read-but-worth-it-because-we-all-agree-they're-important books. And often, those lists to me seem to get it very wrong, especially for SF, when they come from academia.

It is understandable that you are conceened about it. But one thing that I think you should consider is that people like Tolkein and Howard (I am not researching this bold statement, so please be gentle if I am totally wrong here) were influenced by folklore and history primarily. These are inexaustable wells of inspiration that fantasy (and I'm sure other genres of fiction) dip from, so even though the great authors may not get the respect they deserve, its hard to imagine a world where the genre sinks into complete degeneracy.

I loved Dunsany when I first discovered him, still do. I also reread Heinlein and an assortment of classic and newer writers as " comfort food " sf.

Most sf and fantasy seem to me to survive any dated references quite well. The substance of the stories tends to be independent of the details or color.

Perhaps I just chalk any dated references up to parallel worlds...

I'm delighted with so much of the newer pieces, wishing for more reading time!

Anonymous posts "These days there are so many amazing novels and stories that arise out of non-European/non-Western modes of thinking and folktales or myths, why would I bother soaking myself in a history that erases or ignores such things?"

I think we need at least some acquaintance with the older works to fully appreciate the newer works. I know for me they are even more wonderful because they break those older mindsets.

There will always be some piece that just doesn't click. But I can usually appreciate it in some ways.

To Meg's wise and gentle thoughts, I might add that many classic writers, Hope Mirrlees for one, were not at all sexist. Nor was Amos Tutuola, the great Yoruba fantasist, racist. These are serious charges to level against writers one has never read.

Also, there is much more to great fantasy than the folklore it's based on. Try reading LUD-IN-THE-MIST and THE PALM-WINE DRINKARD and see if you don't agree.

Not to be rude to my elders (or contemporaries, from the perspective of the youngsters--or me if you weren't implicitly making an issue of the nominal gap between our ages with your references) but the ****ing Ballantine Adult Fantasy Series is more than 35 years old, and Dunsany has been oop for almost that long. (I read him first in high school English class--we're talking the late 1970s--and no one in the sf magazines was talking about him then, nor were any of his works in print.)

It's difficult to be influenced directly by someone you never have a chance to read.

Otoh, I'll give you high odds that today's sfictioneers and fantabulists will claim to have been influenced by the Swanwicks and (Joan) Vinges and LeGuins and Kushners and GIGilmans who themselves were influenced by the Dunsanys and Davidsons and Mirrleeses and Kuttners and (C. L. or even Ward) Moores.

Or even the van Vogts and del Reys.

Face it, Michael; we're getting old, and you have gone from being influenced to being An Influence.

There are worse fates, and it's hardly the time to go Full Clute--"Sf is dead. I said so at least ten years ago, and have been saying so ever since, and I'll keep writing it and writing about it because I have nothing better to do than live and breathe in a dead genre."--when the seeds you have been sowing yourself are just now bearing fruit.

I wonder if the situation is different in the UK and Ireland, where Gollancz has done a very good job keeping books like Lud-in-the-Mist, Time and the Gods, The Worm Ourobouros, A Voyage to Arcturus, etc. not just in print but on shelves. Lots of these books are available in print-on-demand or e-book format in the US, but you'll never see them in stores, and the texts may be victims of poor copyediting or digital scanning, saddled with awful covers, etc.

By the time I was born, the Ballantine Adult Fantasies had been out-of-print for over a decade, but I still managed to become aware of them, thanks to older fans like my uncle. When I see a BAF book I don't own, I generally buy it.

It may be that some of the younger writers are looking towards more recent "out there" writers for influence. Russell Hoban's Riddley Walker comes to mind as a very strange book that has had a big influence both inside and outside the genre.

Here via Justin Howe's blog post, inspired by yours. There was a time when people could feel on top of, never mind all genre literature, but all human knowledge (it wasn't true, but they believed it was)--but yes, as any field deepens, this is the problem we get!

It reminds me of a funny Wondermark cartoon that ran a few days ago, with a woman trying to do triage on what reading she should attempt: the classics? current hits? edgy borderline stuff? She bewails the fact that her reading isn't voracious enough.