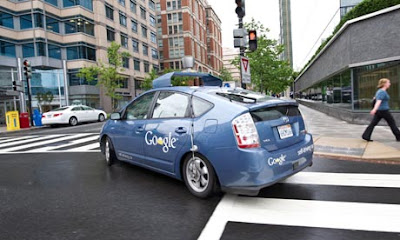 There's one of them up above -- a self-driving car.  Looks deadly normal, doesn't it?  Oh, it has that goofy camera on top, but that's just Google collecting street views for its Earth app. Still, we can confidently expect it to change the world in surprising ways.

I've been thinking about self-driving cars off and on for the past decade, ever since it became obvious that they were about to arrive.  Some things are pretty obvious:  They'll be a godsend for people with a drinking problem.  There'll be an upsurge in fuel consumption and a real traffic problem in places like New York City as, rather than spend forty bucks for a parking garage, people just tell their cars to drive around the block for a couple of hours while they go to see a movie.  And every medium-sized city in America is going to hope to revitalize their downtown shopping districts by building convenient pull-offs in front of the shops where you can get in and out of your car before it's sent to free parking lots in the cheap part of town.

But there are going to be problems, too.  I think that a lot of parents are going to send their children to school in driverless cars.  The default situation in the U. S. is that most parents have to leave for work before their kid leaves for school, and come home after their child does.  Once your car can drive itself, the obvious is to put in a nanny-cam and let your Prius do the driving.

I can't see the police or politicians liking this much -- it feels too much like reckless endangerment.  And I'm pretty sure there are going to be some very creepy people looking to game the situation by luring a child into what only looks like the family car.

To my embarrassment, though, the whole thing hasn't set my imagination aflame.  Once the driverless car becomes common -- and since they're going to be much safer than human-driven cars, I expect that will happen fast -- there are going to be huge social consequences.  Changes as profound as those brought on by personal computers, cell phones, and the Internet.  Some good hard thought and some good crisp writing, and Somebody can get credit for the rest of their life for having predicted them.  Which is a useful thing for a science fiction writer.

I'm not going to do it because my hindbrain apparently just doesn't find the chore interesting.  So it might as well be you.

You'd better move fast, though.  Driverless cars are already on the road and they're going to be an everyday sight soon.   A few years back, a friend told me that he'd test-ridden a driverless car on a closed track with paid drivers in regular cars who would occasionally cut if off or slam on the brake right in front of it.  "How did it feel?" I asked him.

"You'd be amazed," he said, "how little time it took for it to feel perfectly ordinary."

Many years ago there was an earthquake in Thailand, and victims trapped in the rubble were calling for help on their mobile phones. At the time I thought it was one of the most purely science fictional things I'd ever heard of.

No amount of mental contortions can recreate that feeling these days.