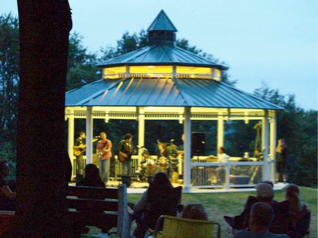 Sitting in the backyard last night I thought I heard distant music.  So I went inside and suggested to Marianne that we go see if there was a concert at Gorgas Park.

When first we came to Roxborough, thirty years ago, Gorgas Park was shabby and run-down, the way most neighborhood parks were at the time.  (It would take a social historian to explain why this was so.)  There were swings and a slide, of course, but they were surrounded by broken glass.  There wasn't a great deal of social activity going on there.  Mostly, it was a place where teenagers went to drink after dark.

Today, thanks largely to the Friends of Gorgas Park, the place is transformed.  They cleaned it up, landscaped it, put in playground equipment that you'd be happy to let your children play on, planted flowers, built a gazebo that also serves as a bandstand. They sponsor flea markets, concerts, movie nights, a harvest festival.  Last week, the park's plantings won a prize from the Philadelphia Horticultural Society.  Now, it's the very heart and soul of Roxborough.

You can see what the park looks like here.

Marianne and I went to the park and there was no concert -- the music, which had faded to nothing, probably came from a band playing in one of the neighborhood bars.  So we sat on a park bench in the dark above the empty gazebo and gazed down on it, listening to ghosts playing John Cage's 4' 33".

The whole point of that piece, you'll remember, was that by not playing a single note the pianist forced the audience to listen to the ambient noise of the theater, to hear what normally is censored out by the mind's filtering functions.

So we listened and heard jet planes hurrying to Philadelphia International to disgorge their weary travelers. A dog barking from a yard somewhere down toward the river.  A multitude of cars off to do all those things Americans do.  A little girl in the playground, zealously watched over by her mother, laughing and laughing and laughing in the night.

Above:  The gazebo, taken from the Gorgas Park website.