City Under the Stars is Born!!! 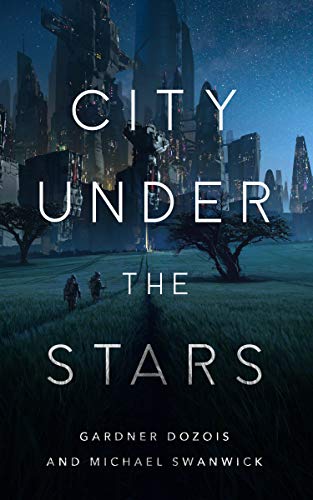 Today is the publication date for City Under the Stars, my most recent and Gardner Dozois' last novel.

Everybody knows Gardner's work as an editor. Fewer know what a fine writer he was. If you're among those who know his fiction, you already want this book. If you're not... well, this is a good time to find out.

Here's how it starts:

It was high summer in Orange, in York, in the Human Domain of Earth. There was commerce in the town, crops in the field, beasts in the byre, bandits in the roads, thants and chimeras in the hills, and God in His Heaven—which was fifteen miles away, due east.


From where Hanson worked—on an open platform extending out from the side of the giant State Factory of Orange and nestling right up against the bare, rocky face of Industry Hill—it was possible to look east, out across the teeming squalor of Orange, and see the Wall of the City of God marching north-south across the horizon, making the horizon really: a radiant line drawn across the misty blue of distance, pink as a baby's thigh, pink as dawn. And to know that it stretched, in all its celestial arrogance, over two hundred miles to the north, and more than three hundred miles to the south, unbroken, cutting three-quarters of the Human Domain off from the sea—the City of God, perfect and inviolable, with a completeness that was too much for man. That was what Hanson must face every day when he came to work and stood in the sun and in his human sweat with his little shovel. That terrible, alien beauty, indifferent to mortality, forever at his back, a head's turn away, as he worked, as he grew old. And knowing that God and all the angels were in there, pure and incomprehensible as fire, maybe watching him right now, looking down over the Edge of the Wall and into the finite world: a huge watery eye, tall as the sky.


But no one ever thought much about God on shift, not for long…


Which is one lovely stick of prose. I can say that because every word of the opening section was written by Gardner. There was nobody who ever wrote quite like him.

City Under the Stars took almost fifty years from first inception to publication. I wrote an essay, included with the novel as an afterword, laying out the whole grand saga. Here's a small fraction of it:

At the end of a visit to his new Society Hill apartment—a far cry from the Quince Street digs, with a fireplace and a Jacuzzi tub—Gardner saw me to the front stoop and then said, “Wait a second.” He went inside and returned with a familiar cardboard box.

“I’m never going to write the Digger Novel,” he said. “So you might as well take it and see if you can turn it into a novella.”

I took the box from him. “I know exactly how to do this,” I lied. “I’m not going to tell you now because I want it to be a surprise!” (Remember, I’d long ago given up on Gardner ever finishing it on his own.) I clutched the box to my chest and began to edge away, afraid that Gardner would come to his senses and snatch it back.

“It’s clear to me this isn’t going anywhere,” he said unhappily. “But maybe you can make something of it.”

I was down to the sidewalk. “Wait until you see what I have in mind! You’ll love it!”

Gardner wasn’t listening. In his heart of hearts, he was mourning the necessity to hand over the child of his imagination to me. “But I’ll tell you what,” he said. “Make the conclusion open-ended. Just in case we decide to make a novel of it.”
“You must be reading my mind!” I chirped.


Miraculously, in that instant, even as I was saying those words, the solution entered my mind…

And because it can never be said too often . . .

Gardner Dozois could be a very dark writer indeed. People used to marvel at the contrast between the jolly fun-loving man they knew and the stories he wrote. And much of this novel adheres to that pattern. Three-quarters of the way through reading it, Marianne said to me, "This doesn't end well, does it?"

"Oh, sure. One of your happy endings."

"A happy ending! For everybody!" I insisted. "And it was Gardner who came up with it."