City Under the Stars--coming SOON! 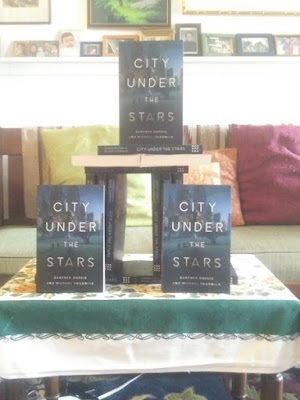 Look what came in the mail!

City Under the Stars is a collaborative novel written with Gardner Dozois, my latest and his last. In an afterword I trace its near 50-year history, culminating in its publication this month.

It was high summer in Orange, in York, in the Human Domain of Earth. There was commerce in the town, crops in the field, beasts in the byre, bandits in the roads, thants and chimeras in the hills, and God in His Heaven—which was fifteen miles away, due east.

That is one lovely stick of prose. I can say that in all modesty because every word of it was Gardner's. Most people today know Gardner only as an editor, but he was one of the best writers in the genre. I mean that seriously. He was a much better writer than he was an editor--and as an editor, he was aces.

So City Under the Stars is here and it's almost available to buy. Keep watching the skies!

Open Road Media is putting the E-book of my novel, Jack Faust on sale for $1.99 in Canada and the US this Sunday, August 2nd.

That's one day only!

They tell me that you can subscribe to the newsletters at the links below so that you will get the direct link to the deal on the day that it appears.


Jack Faust is my dark but beautifully written version of the Faust legend. I'm quite proud of it. So if you read E-books and are curious, well, here's your chance to buy it cheap.

No hardback. The times have changed and with them the publishing rules.