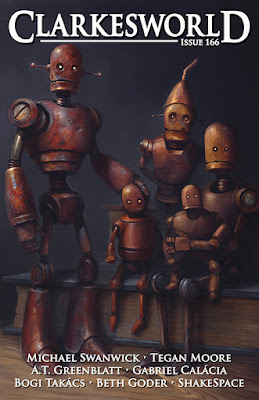 I'm in print again! My story "Artificial People" is in the current issue of Clarkesworld.

"Artificial People" was plotted out during Sparks and Embers: a Lyric Fest concert at  The Academy of Vocal Arts. The concert was described in the program book as "Imaginative song pairings to ponder the spark of new life, new seasons and new love, with the embers of endings."

So now you know where stories come from and what my story is about.

You can find my story here. Or just go to clarkesworldmagazine.com and wander about.

I have often observed that when I'm my most productive, I look the least so, and when I'm the least productive is when all the stories in the pipeline appear. Right now is the exception. "Artificial People" is the first of several stories coming out soon and I'm simultaneously working on at least a half dozen projects at once.

But am I content? No. Because I'm not currently working on a novel.

Gonnabe writers, take this lesson the heart: You will never be happy. I once heard George R. R. Martin complain that a story of his wasn't going to make it onto the Nebula ballot, while holding two fresh-won Hugo Awards in his arms.

Michael, I would say too much is never enough, except there is no too much when it comes to your stories.

Wow, I was expecting a "mere" reprint. Really excellent story. Makes me feel good, that I recently signed up as a Clarkesworld Patreon!