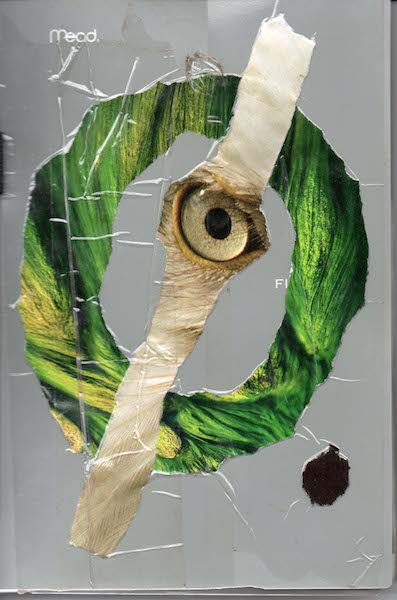 Look what I found!

Some time ago, I posted every page of the Image Notebook I created to help me imagine the world and people of Industrialized Faerie for The Iron Dragon's Mother. What I didn't mention was that it was actually the second such notebook I'd made. The first notebook I lost--forever, I thought. But as it turned out, it had been misfiled in my office.

This is why you should clean your workspace at least once a decade.

The Zero Notebook, as I think of it, was begun all the way back in 2009. I pasted images from magazines and newspapers into it, created collages, some of which I altered, sought inspiration from the uncanny but visualizable. The end result is something very close to (but not identical with) outsider art.

I'll spare you the bulk of the images. But starting today I'll be posting ten images from the notebook. One on each weekday when I don't have any other news to pass along. This is the first one: the notebook's cover.

The eye, of course, represents the eye of a dragon. It's slashed across the oval to create a zero.  The dot to the lower right is meant to suggest that the glyph represents the letter Q.,  though, of course, not exactly. That's because I wasn't looking for Answers. Just Questions.

There are a few (not many) words in the notebook. Here's an entry I ran across that begins with (almost) the cover glyph:

Q. What does the Goddess want?
A. Wrong question.

All of the above carried through into the novel and became a major, if close to undetectable, theme. The Iron Dragon's Mother would have been a very different book if I had started it with a different image.

The crinkly stuff is wide transparent tape, used to seal the image onto the cover. If this notebook ever winds up in somebody's collection, that's going to be a major conservation issue. Not my problem.


Above: First image. Nine to go.