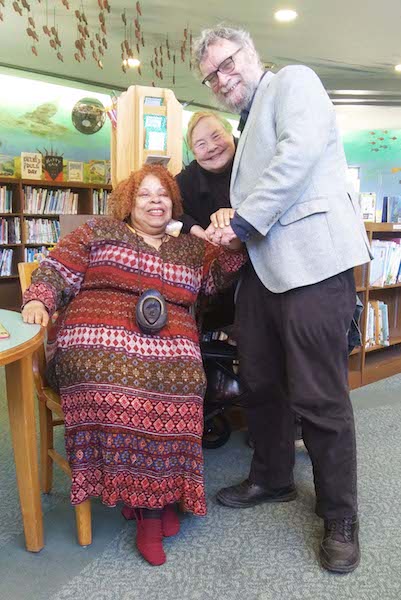 On Saturday, Marianne and I broke our self-isolation to see Karen E. Quinones Miller at the Haverford Free Library of Philadelphia, where she talked about  Harlem Godfather: The Rap on My Husband Ellsworth "Bumpy" Johnson, which she co-wrote with the gangster's widow, Mayme Johnson.

Bumpy Johnson was a complex man. He did all the terrible things that gangsters do (except peddle heroin, which he disapproved of) but he also did a lot to support the community in Harlem. He had a library so good that members of the intelligentsia borrowed books from him.

Karen knew him when she was a girl as a kindly man who encouraged her to get the best education she could and to make something of herself. It was only when he died that she discovered he was also one of the most dangerous and feared men in New York City. As an adult, Karen stayed in touch with his widow and they two became fast friends.

Speaking of complex people, Karen E. Quinones Miller is ex-Navy, a former reporter for the Philadephia Inquirer, a historian, and a best-selling novelist. When her first novel, Satin Doll, was turned down by numerous agents and publishing houses, she published it herself--and sold 28,000 copies in eight months. One bidding war later, it was published by Simon & Schuster.

Karen is one of Marianne's and my favorite people. She is brimming with life. Karen wrote a semi-autobiographical novel titled Angry-Ass Black Woman and, yes, it's possible to imagine her aflame with righteous wrath. But she is one of the most positive people I know. It's a joy to see her.

Karen doesn't make many public appearances since she was diagnosed with multiple sclerosis. But when she does, she's a pleasure to be with. So there's my tip for you: If you ever get a chance to meet her, do. You'll thank me afterward.