And the Winners of the Godless Atheist Christmas Card Competition ARE... 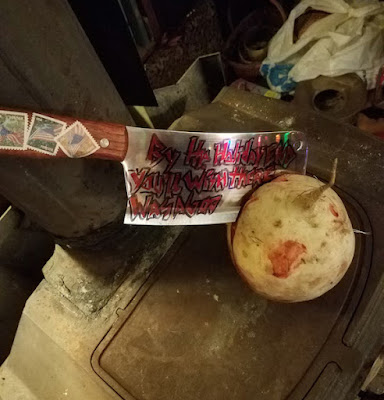 It's been quite a year for Godless Atheist Christmas Cards. As anyone who listened to the deliberations of the Not At All Nepotistic Blue Ribbon Panel of Family (posted here yesterday) knows, there were so many bleak and nihilistic cards that ultimately we had to throw up our hands and declare that all but the first and second place cards had placed third.

Congratulations, everyone! Take a bow.

But there can only be one. Or in this case, one plus a second-place winner.

Second place went to  artist extraordinaire Jason Van Hollander for his beautifully-printed Signum Inferni, featuring a sheet of signed and numbered hell stamps presented in an art-sleeve with an owl in robes. The stamps themselves showed members of the Pantheon of Hell, with such names as Insania and Insomnium and Absurdum.

There it is below. 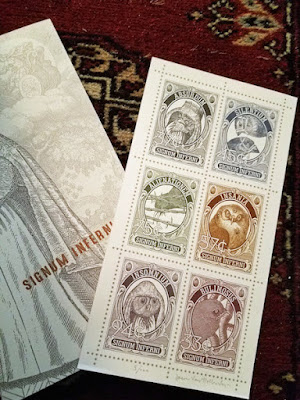 In any other year, Jason's card would have been the sure winner. But this year, the winning card arrived not through the mail but hand-delivered onto our back porch in the dead of night. It was not printed on cardboard stock but hand-written on a meat cleaver with stamps affixed to its haft. Instead of an envelope, it was buried in a turnip. A turnip with a grotesque bleeding face.

And its message? BY THE HOLIDAY END YOU WILL WISH THERE WAS A GOD.

Despite the fact that it was clearly created with the sole purpose of winning the competition, the Not At All Nepotistic Blue Ribbon Panel of Family felt that we had no choice but to declare it the winner. Not just for the Godless Atheist-icness of it but because if the police had happened to notice its perpetrator slinking about our back yard, they would have discovered he had written a terrorist threat on a meat cleaver. The ensuing conversation is one that I personally would love to have heard.

So, congratulations, Sam Jordan. You not only won the competition, you ducked a long and invigorating conversation with the boys at the local precinct.

That's the "card" up at the top of the page.

I'm sorry I didn't have this up last Thursday as planned. A cold intervened, for which I hope I may be forgiven.

In any case, my apologies. I hope that that Sam's turnip made this post worth the wait.

I feel strongly that I would have been able to talk my way out of that situation had I been caught.

Again, I would have loved to listen in on that conversation.