A Strange Person To Encounter In Somebody Else's Story 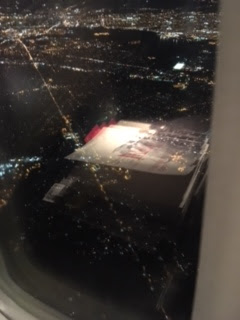 It is a strange thing to encounter one's own name in a story written by somebody else. But that's exactly what happened to me on the plane home from Kansas City. I was reading Jeffrey Ford's new collection A Natural History of Hell. Which is, so far, brilliant. I've always loved this guy's short fiction but it seems that over the years he's gotten better and better at it. My chances o getting a Locus Award for best collection next year may have just gone down.

Anyway, I had just started reading "Rocket Ship to Hell" which I had somehow missed on its first publication, when I came across the line, "Somewhere along the line Michael Swanwick told me I should check out Fritz Leiber's Our Lady of Darkness."

Wow! I remember that, too. It happened in 2001 at the Millennial Philcon, as that year's Worldcon was called. Jeff and I were talking literature (we're funny in that way; most writers don't) and when I discovered he hadn't read that book, I felt an extraordinary rush of pleasure at knowing that I was about to recommend a work to a writer who was the perfect reader for that astonishing book.

I remember also that on the way out of the convention, I stopped in the dealer's room and bought that exact same Ace Double he mentions in the story for, I think, a buck-fifty. If I'd known it was such a rarity, I'd have read it immediately. But as it is, it's languishing unread somewhere among my books, possibly in the cartons I boxed up when the shelves began to overflow. I should go looking for it one of these days.


And speaking of MidAmeriCon...

Over at PositronChicago. com, there's a recap of one of the panels I was on. This one was "Does SF Still Affect the Way We Think about the Future?" I'm always grateful for evidence that I managed to say something intelligent on a panel -- and I was far from being the only one.

You can read the recap here.


Above: There it is, the distinguished book, Jeff's collection, floating in the airliner window of the American night.

'Swanwick on a tipping point where people outside SF started using SF extrapolation-techniques to think about the future, while people in SF remained writing "inaccurate present-day fiction" rather than thinking up new futures.'

This sounds like an interesting point, as much as I can glean from this brief recap. I think you're onto something, as far as I can understand without specific examples of what you meant.

Obviously, you don't take assignments. Still, if you're ever stuck for a blog post subject sometime, you could maybe elaborate on this with examples.

It's strange. Writers (and habitual readers of fiction) confuse that special declension of experience with life. The more rigorous the act of speculation the narrower the relationship to reality becomes. The future can barely be imagined much less predicted.