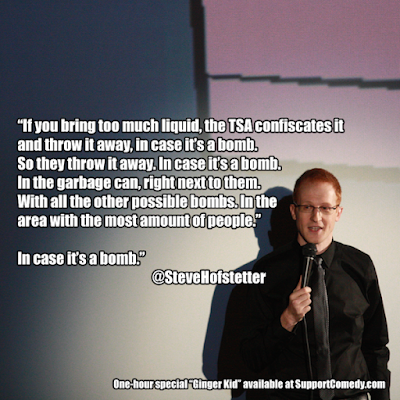 I've been working all day on an introduction to a book by somebody I greatly admire and only now remembered that it was Wednesday and I owed you all a post. So very quickly I took a rant I'd posted recently on Facebook, changed a word or three, and here it is below.

A while back, I posted an image icon that comedian Steve Hofstteter made pointing out that liquids confiscated at airports as possible explosives are dumped in a container in the most densely populated part of the airport. My friend Billee Stallings then asked what the solution was, but I was busy and didn't answer.

So I will now:

In all fairness to the TSA, they're worried about binary agents, which apparently aren't terribly dangerous until combined.

But in all fairness to Steve Hofstetter, the TSA isn't confiscating perfumes and shampoos because they believe there's a chance in hell that they're binary agents. It's all "security theater," actions performed to make you think that it's safe to get on the airplane.

The solution is to fire pretty much all the TSA agents, train those who are retained, and hire people who know something about airport security to replace the rest. A friend points out that Israeli airport security is mostly handled by young female army vets, who are rotated out every two years. They'd be the obvious place to start recruiting.

It won't happen, though, because competent airport security people cannot be hired for the money TSA agents are paid. So we get security theater instead.

But at least it's cheap.


And since you're wondering...

The title above comes from my experiences talking in a semi-professional capacity with (quite likable) people from the Department of Homeland Security. The seven words they simply cannot hear (I could see their eyes glaze over with incomprehension) are: "Stop making us take off our shoes."


Above: The image icon itself. I presume this reposting comes under the category of fair use because it helps spread the word about Hofstetter's wit.

Well, again, in all fairness to the TSA, the body scanners do that.

But it's notable how many other nations let you keep your shoes on. They must think we have a fetish about them.