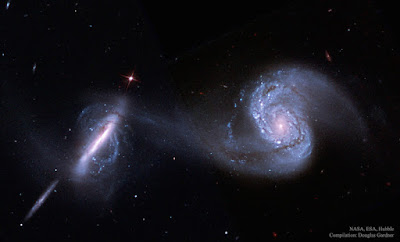 I had a conversation with Tom Purdom the other day, during which he observed that the "winner take all" economy is nothing new to writers.  There are a small number like George R. R. Martin and Stephen King and Neil Gaiman who get pretty much all the money they deserve (and rightly so). Then there's a larger but still scandalously small number, such as myself, who make an okay living out of it. And then there are the vast majority of writers who will never come close to being able to quit their day jobs but keep plugging away in the hope that someday they'll break big.

Which is such a depressing thought, I decided to share with you today's Astronomy Picture of the Day.

This shows Arp 87, a pair of galaxies (NGC 3808B on the right, and NASA inexplicably didn’t identify the other one) engaged in a dance of death. The bridge of stars, dust, and gas stretched between the two are the result of the pair having passed close to each other, as are the many blue star clusters in NGC 3808B, which are new stars resulting from strong gravitational interactions. Billions of years from now, the galaxies will collide and merge, resulting in an extravaganza of destruction and creation.

Which kind of puts things into perspective, dunnit? Even the problems of writers are small potatoes by comparison.


And as long as we're talking about Tom...

Tom Purdom, who published his first stories in the 1950s and was still writing when a criminally careless bicyclist smashed him to the concrete, remains in rehab. He is making slow but steady progress and there's a chance he'll be home for Christmas. In the meantime, his worst enemy is boredom. Why not send him a card, a letter, a joke, an autographed copy your most wonderful (if you're an author) or favorite (if you're not) book? His mind is as sharp as ever, so feel free to be as erudite as you like.

But not, his friends all hope and pray for too many weeks longer.

(Note that the room number is different from the one published in Locus. He was there but got moved to a better room.)