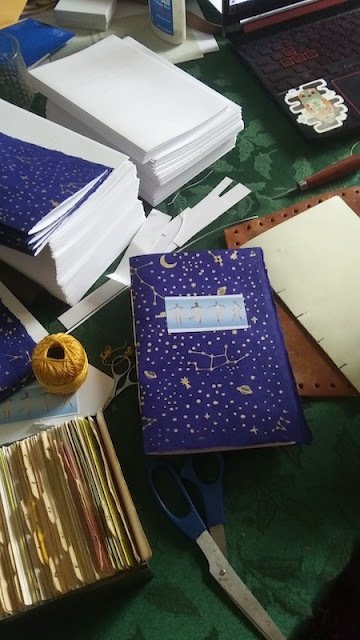 Look how close Marianne is to being finished making The Lonely and the Rum for Dragonstairs Press! There in the center is number 2 of an edition of 125 hand-stitched, signed and numbered chapbooks. The paper for the wraps is beautiful as is the charming illustration made by Susan McAninley for the cover label. I think this is one of Marianne's best creations yet.

So it was pretty obnoxious of me, just now, to send Marianne the text for a totally different chapbook, which she intends to create and put up for sale before finishing The Lonely and the Rum.

Five Rings is a collection of five very short whimsies--"Gold," "Silver," "Bronze," "Last," and "Also There"--celebrating the current Olympics. Because this is officially the XXXII Olympiad, there will be only 32 copies made. Because the Olympics end on August 8 and Marianne wants the direct connection to the event, this chapbook has priority.

Fewer than thirty copies will be available for sale, I expect it to sell out pretty much immediately.

Fans of Marianne's beautifully made and scandalously affordable work will simply have to wait a little longer for The Lonely and the Rum.

I know you're wondering about the content of The Lonely and the Rum. It's... well, it's a little hard to describe. A few years ago, Greer Gilman and I had a panel at Boskone titled Moonwise of Babel, which was just the two of us chatting about fantasy. It went over well. A transcript of it was published in Foundation. So when Boskone went virtual this year, I proposed that Greer and I have another conversation, this one about a number of fantasists--chiefly Sylvia Townsend Warner, P. L. Travers, Stella Benson, and Tove Jansson, but others were mentioned as well--who had no particular commonalities but seemed worthy of discussion. We went into the conversation with a title, no agenda, and a great deal of curiosity to discover what we might have to say.

The Lonely and the Rum is the transcription of that two-person Zoom panel. It is a rather erudite, quintessentially odd conversation. It breaks off in the middle of an observation. And I think it's quite wonderful. There's nothing exactly like it. It is simultaneously a miniature and one of the eccentricities of our corner of the literature.

I concluded that we had found the other heart of fantasy, Greer that we had made an asterism of our subjects.

Above: Periodically, I feel I should remind everybody that I am only the content-provider for Dragonstairs Press. Marianne is the owner, editor, and sole proprietor. So being married to her is like having my editor in the same house as me. Surprisingly pleasant, to be honest.

Posted by Michael Swanwick at 3:40 PM