The Iron Dragon's Daughter in Czech! 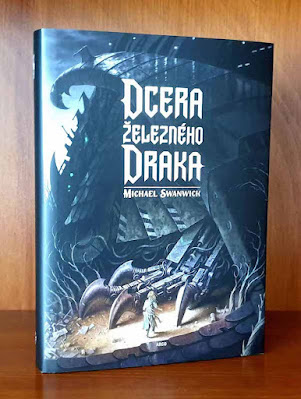 I'm in print again! This time, it's The Iron Dragon's Daughter, appearing in Czech translation. There's the cover up above. Looks great, doesn't it?

I wrote an introduction specifically for this edition which I don't feel free to share because intros are selling points for books. But I'll give you the title and the very beginning immediately below:

Foreword: My Years of Not Writing The Iron Dragon’s Daughter

Well over a quarter-century ago my wife Marianne Porter and I were driving from Philadelphia to Pittsburgh to visit relatives. Our ten year old son Sean was in the back seat, engrossed in a hand-held video game and Marianne and I were talking first about fantasy literature and then about steam locomotives. I made a joke about the Baldwin Steam Dragon Works and Marianne laughed.

A mile farther down the road, I said to Marianne, “Write that down for me, would you,?”

That instant when I recognized that my quip was actually a story idea was when The Iron Dragon’s Daughter was born. Over the next few hundred miles…

The introduction goes on from there to the moment, years later, when I actually began to write.But to know that story, you'll have to buy the book. And read Czech.