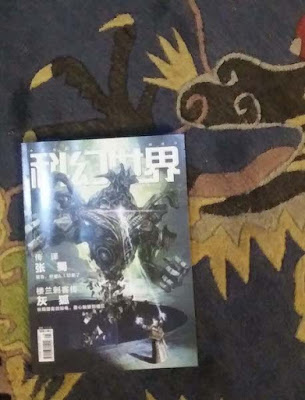 Once again, I'm in print in China!  That always gives me a particular pleasure because I've visited the country several times and I have friends in the science fiction community there.

The magazine in question is Science Fiction World and the story is "Artificial People," which was published not that long ago in Clarkesworld. The story is about an artificially created being coming of age in a difficult era and trying to come to terms with life. So that's pretty much universal.

The late and very brilliant writer Thomas Disch eventually came to the conclusion that science fiction was a children's literature--or, to put it a little close to the bone, a literature for adolescents. Many science fiction writers took umbrage at this. But I gave it serious thought and decided that, whatever Disch's intentions, the claim is not the insult he meant it to be.

For most readers, the most intense period of their reading lives is in their teen years and shortly thereafter. They're still trying to figure out life, to understand what's going on, and as they re ad they're looking for clues. So if you have something to say about the cruelties and wonder, the glory and despair of existence... well, often enough an adolescent will be your ideal reader.

I found myself thinking about this today in part because of the nature of the story. But also because of the nature of Chinese science fiction fandom. For the longest time, SF was seen as a YA literary form. Readership peaked senior year of high school, declined in college, and went to zero on graduation. Cixin Liu was the first writer there to become an adult best-seller. But he's certainly not going to be the last.

Right now, Chinese science fiction is where American science fiction was not so long ago. But they're catching up fast and I applaud them for that. This is an exciting time for SF in China and, as I've often said before, I'm happy to be an extremely part of that.

You can read "Artificial People" in the original English here. Or, you know, just go to Clarkesworld and poke around. It's a good magazine. It will reward your time.

Above: The Dragonstairs Press rug dragon is delighted with my newest foray into print.