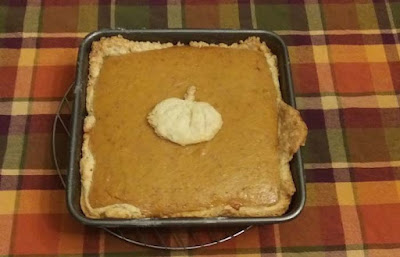 Marianne and I came into the Thanksgiving season feeling a little down. Normally, we have guests for Thanksgiving dinner, sometimes family, sometimes friends. Last year, we had family and friends.

The great fantasist T. H. White used to say that the best cure for depression was to learn something new. Me being more of a folkloric turn of mind, I decided that we should create a new tradition. So we stole one from a friend in New England.

One thing I like to do around this time of year is to ask people what foods you absolutely have to have on Thanksgiving for it to be a proper holiday feast. The spread of answers on this one is very wide. Some people say there has to be turkey and the rest doesn't matter. Others say the same thing of ham or lasagna. Some claim to have absolutely no preferences; one of these admitted to ordering Chinese take-out the year before.

Others are more interesting. Some have to have cranberry sauce, others green bean casserole. For me, there must be clear cranberry sauce--the kind with the ridges from the can on it. Also mashed potatoes, stuffing (the proper kind--no chestnuts or oysters), celery, radishes, creamed onions... well, the list goes on.

But the absolute winner was our New England friend, whose list begins with three kinds of cranberry sauce and concludes, much later, with three different pies for desert--apple (or is it pumpkin?), pecan, and squash.

And the squash pie had to be made in a square pan.

Children soak up the family lore. They only rarely question it. It was only when our friend's mother announced that she passing on responsibility for all the cooking that our friend discovered why it was the squash pie was made in a square pan.

By the time she'd cooked everything else, square pans were all that were left. All the round ones had been used.

So we decided to adopt this custom as our own. Marianne made squash pie in a square pan, and even made a small crust acorn squash to go on top.

She'll be making it again next year, of course. Because it's a tradition in our house.

Posted by Michael Swanwick at 9:15 AM

My wife and I had turkey yesterday, but alas, no guests. However, the biggest Thanksgiving weekend tradition for me in my now somewhat advanced age is the properly prepared oyster shooter, several of them.
This tradition was adhered to yesterday, and today, as well.