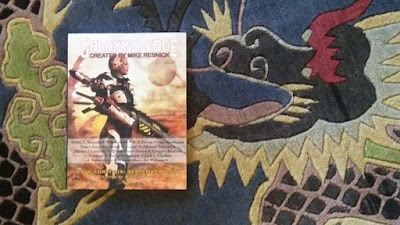 I'm in print again! This time, it's "Triceratops Summer," one of my best stories ever. It's in the September issue of Galaxy's Edge, which was created by good ol' Mike Resnick.

Mike and I were on different parts of the SF spectrum--he a little more to the adventure end and me just a frazz more literary--though we both crossed the line into the other's home territory from time to back. Back in the day, SFWA had a publication called the Nebula Awards Report, which was simply a list of all the works nominated so far by members for the Nebula. arranged by category and then within each category by number of nominations received, with the names of people nominating each work. I used to read that thing like race track gamblers read tip sheets. Why doesn't that great story by Joanna Russ have more nominations? How could a mediocre story like that other thing be doing so well?

But if a couple of writers from my group and Mike Resnick liked something, I'd drop everything to get a copy of the publication it was in. Because I knew the story was something special.

This always worked. Because Mike Resnick loved science fiction, read everything, and knew a great story when he saw it.

So, really, it didn't come a surprise when he created Galaxy's Edge. He had all the right stuff to be an editor.

But if you take a look at his bibliography and see how much writing he did at the same time, you have to ask yourself: Wherever did he find the energy?

Posted by Michael Swanwick at 11:00 AM