The Death of Aubrey Darger 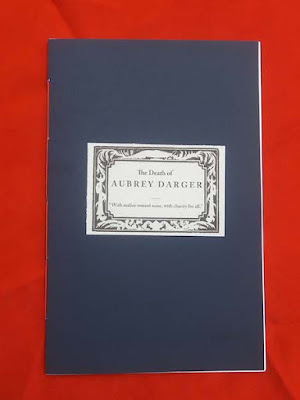 To begin with, this is not a new story. What I did was to take the opening chapter of Chasing the Phoenix, the second novel-length Darger and Surplus adventure, and lightly edit it. Et voila! The Death of Aubrey Darger--a perfect, stand-alone short story.

Marianne Porter has made of this story a perfectly lovely chapbook, bound in black paper, with a label modified from Abraham Lincoln's death announcement. This is a hand-stitched, signed, and issued in an edition of 100.

She is selling the chapbooks, as usual, for far too little money. $12 in the US and $14 internationally, postage included.

As of an hour and 17 minutes after publication, roughly one half of all available copies of The Death of Aubrey Darger are still available.

Posted by Michael Swanwick at 10:20 AM