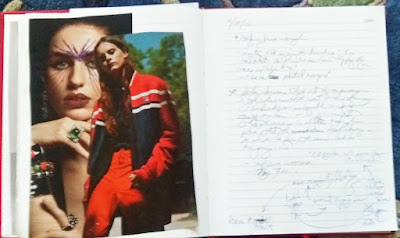 So what do dragon pilots look like? Tough, competent, dangerous. Pictured above are two pages from the second Prose Notebook for The Iron Dragon's Mother. The two young ladies are Sibyl and Ysault. You probably can't make out the text (and if you can, you probably can't make sense of my handwriting) but the picture was originally titled "Sibyl and Ashley." I gave all the dragon pilots Irish names, but that doesn't mean they're of Irish descent. It seems to be a convention among high-elven families for naming their female half-elven bastards.

There's a lot of plot that I decided not to use on that page, incidentally. Cat is invited to to join the Resistance. Helen interviews Sibyl out of compassion. And there's a reference to a "straggler with three packs of Marlboros." None of which made it into the novel.

Also, I worried a lot over what kind of swagger Ysault had.

Not everybody, but many people are fascinated by the use of diagrams to build a story. So at the bottom of these posts, I'm going to serialize the diagrams I drew in my Prose Notebooks to help see my way forward.

The first one covers the first chapter. 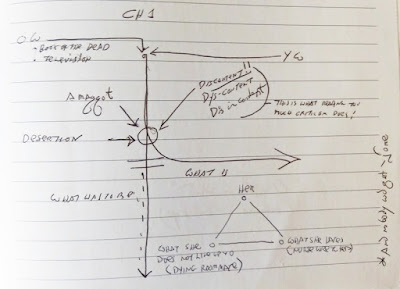 So far as I can tell, the only elements that remain of this diagram are the television  and the Tibetan Book of the Dead.  The triangle opposes "her" (Helen) with "what she doesn't live up to (dying roommate)" and "What she hates (Nurse Wretched)." The last is an obvious reference to Nurse Ratched in Ken Kesey's novel, One Flew Over the Cuckoo's Nest. Both were replaced by a trio of more recognizably human nurses.

I do like the fact that after the notations:

I commented This is what reading too much criticism does!

Posted by Michael Swanwick at 6:19 AM