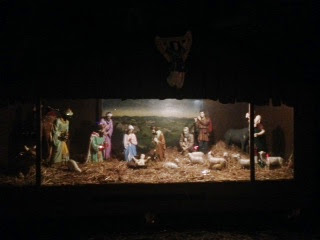 Once a year, I post this story here. I think it says something valuable and true about human beings. So of course it speaks to the holiday season.

Happy holidays, everybody! I hope with all my heart that they bring you contentment and joy. Though, you being human...

When first I came to Roxborough, more than a third of a century ago, the creche was already a tradition of long standing.  Every year it appeared in Gorgas Park during the Christmas season. It wasn't all that big -- maybe seven feet high at its tip -- and it wasn't very fancy. The figures of Joseph and Mary, the Christ child, and the animals were a couple of feet high, and there were sheets of Plexiglas over the front of the wooden construction to keep people from walking off with them. But there was a painted backdrop of the hills of Bethlehem at night, the floor was strewn was real straw, and it was genuinely loved.

It was a common sight to see people standing before the creche, especially in the evening, admiring it.  Sometimes parents brought their small children to see it for the first time and that was genuinely touching.  It provided a welcome touch of seasonality and community to the park.

People were upset of course. Nobody liked seeing a beloved tradition disappear.  There was a certain amount of grumbling and disgruntlement.

So the kindly people of Leverington Presbyterian Church, located just across the street from the park, stepped in. They adopted the creche and put it up on the yard in front of their church, where it could be seen and enjoyed by all.

But did this make us happy?  It did not. The creche was simply  not the same, located in front of a church.  It seemed lessened, in some strange way, made into a prop for the Presbyterians. You didn’t see people standing before it anymore.